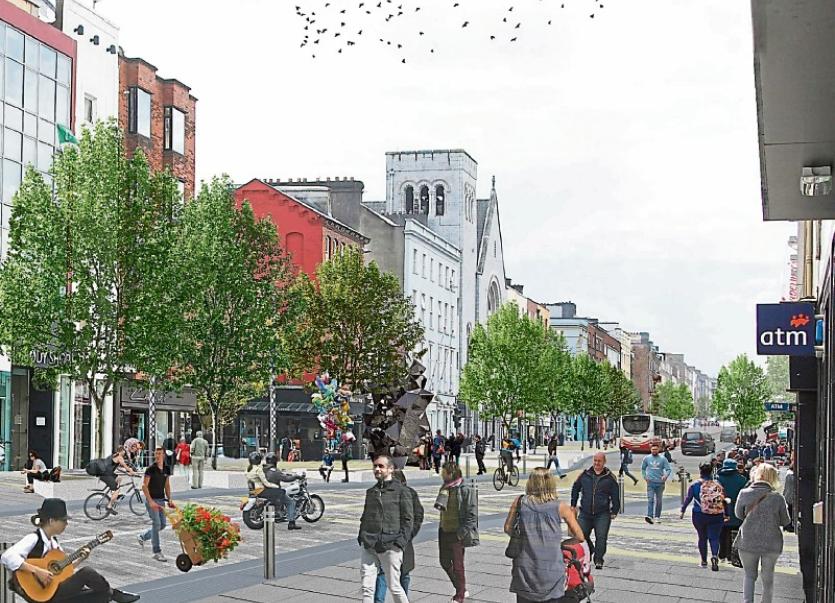 An artist's impression of one section of the proposed revamp of O'Connell Street, which opponents say still prioritises through traffic

On Wednesday evening, September 11, the Limerick Leader published a story by Nick Rabbitts (here) about Limerick Chamber calling for local councillors to vote next Monday in support of the new plans for O'Connell Street that have been proposed by Limerick City and County Council. Here is a counter argument by Ailish Drake and Thomas Bibby of Liveable Limerick which states that the plans are not ambitious enough and that councillors are not being given adequate time to consider public submissions on the matter.

Plans for O’Connell Street have been met with disappointment, according to the large number of submissions online.

The majority of submissions from the public have called for the partial or complete removal of private car traffic from O’Connell Street. They make interesting and lengthy reading, which requires more time than the week afforded to our local councillors to do so.

During the three years that Liveable Limerick has been involved in the debate over the plans for the redevelopment of O’Connell Street, there has been agreement on one thing: O’Connell Street is important for Limerick.

We recognise the work done over the last three years to develop plans for O’Connell Street. However the plans as presented are very similar to the initial proposals tabled three years ago.

As the vote approaches on Monday, we think it’s worth taking a step back and seeing can we achieve a truly world class design for O’Connell Street and the city centre core.

Almost all of the submissions have requested that the Council reconsider this design, to put people instead of private cars at the centre of the design.

We believe that O’Connell Street will never reach its potential as long as it is treated as a thoroughfare for private cars.

Whether we are drivers, passengers in a car or bus, or cyclists, we all end our journeys as pedestrians. And O’Connell Street will never be a pleasant place for pedestrians with two lanes of one-way traffic running through it.

Limerick Chamber of Commerce has called for ‘the implementation of an effective Traffic Management Plan that reduces through-car movement and traffic speeds in the city centre’.

Liveable Limerick presented research at our events that shows that in smaller European cities, reducing traffic in the city centre has a positive effect on the turnover of retail businesses.

For @LimerickCouncil deciding on #oconnellstlk and with the coming of vote on the RSES I wanted to share this again for all of you councillors out there doing your homework before decisions with such an importance for the rest of us. @AoUYU_Ireland @Ire2040 @SouthernAssembl https://t.co/ooYdJUQAtj

And it is not only commerce that is positively affected by reduction in traffic, a city centre focused around people, not cars, encourages people to live and work in the city centre, encouraging economic growth and social inclusion.

We have been consistent in our campaign that cars do not necessarily need to be completely removed from O’Connell Street, but we need to close the street to ‘through’ traffic.

The superblock concept that we have been promoting would not ban cars from the city centre, but would prevent cars from using the city centre as a thoroughfare. To cross the city you would have to drive around the city, not through it.

Thread: We need to talk about the proposed O’Connell St plans and @LimerickCouncil

Yesterday was a worrying development and calls into question the level of democracy and transparency around the process.

It really feels that this one chance to do it right will be lost. pic.twitter.com/vXfoIxywDD

Councillors have only been given a week to consider public submissions before voting on the proposals. A short deferral would allow the Councillors to properly assess the plans against the observations submitted.

A more ambitious approach is required to improve the design and give us a street that prioritises people, not cars. Councillors need to ask themselves if the current scheme is worth the huge disruption that it’s construction will entail and at the end of it, will O’Connell Street be fit for purpose for 21st century Limerick?