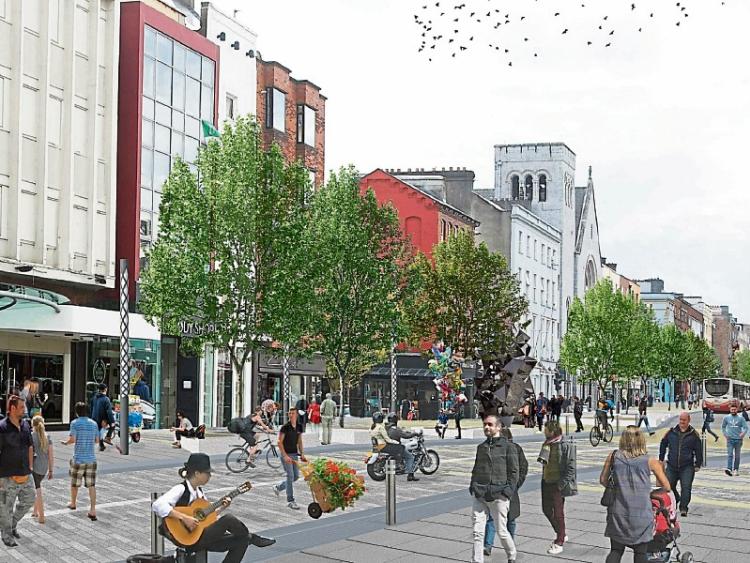 An artist's impression of the proposed redesign of O'Connell Street

An advocate for enhanced city living in Limerick believes the Council should carry out short tests on traffic flow in O’Connell Street before committing to a final design.

John Moran was speaking after fresh designs for the revitalisation of Limerick’s main thoroughfare were unveiled.

And much to the criticism of many, cars will not face a ban from the street under the €9m scheme.

But speaking this week, Mr Moran believes pedestrianisation might not be the answer for a new O’Connell Street – putting to bed notions that his Liveable Limerick movement had this at its heart.

“We’ve never had that as a major objective. The cars we want to take off O’Connell Street are the ones using it for a short time. We need to reduce the traffic need in O’Connell Street. It would bring way down the risk on people crossing the street. We wouldn’t need to worry about the speed limit then,” he argued.

”If you think about it, lots of people are using O’Connell Street as a way to get out of the city, or as a way of getting to the Crescent Shopping Centre. It’s like a bypass of Adare – the problem here is the traffic is still driving through the city as it’s driving through Adare. It’s doing nothing for the shops in Adare, and nothing for the businesses in O’Connell Street,” he explained.

At the moment, there are two lanes of southbound traffic on O’Connell Street, something Mr Moran says it outdated, and hails back to a time before the Limerick Tunnel was in place, and it was effectively a national route to Tralee in Kerry.

The proposals show there will be a reduction in the width of the two traffic lanes on the stretch between the Denmark and Cecil Street junction, with a resultant increase in footpath widths.

Planners are also proposing the laying of street furniture in O’Connell Street, which will include seating areas, bicycle stands and lighting, as well as features such as sculptures, pedestrian plazas and water installations.

Mr Moran said the council could “get a paint pot and try to see how it works”.

He points to the success of the urban garden, outside Penney’s, which started life on this basis.

”Initially nobody wanted to do it. One official said she would. She met with the taxi drivers and they were accommodated. Now, nobody would be arguing for cars to drive on it again or taxis to be parked there,” said Mr Moran, a former secretary general at the Department of Finance.