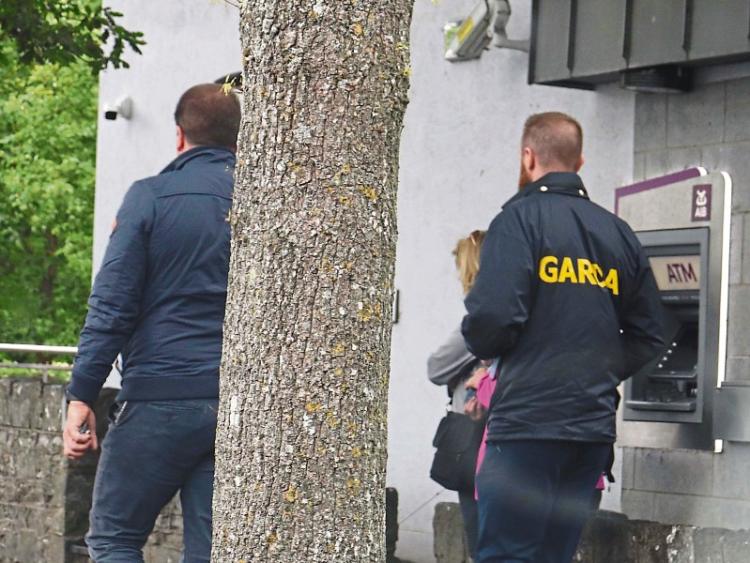 Gardai at the scene of the attempted robbery in Adare

THE quick reactions of a cash-in-transit van driver prevented the theft of a significant quantity of cash from outside a bank in a Limerick village, a court has heard.

Gardai have revealed the driver of the security van retreated and locked the vehicle after he observed a man who was acting suspiciously and allegedly lying in wait outside the Adare branch of AIB.

The incident happened at around 9am on July 26 last – sparking a major garda investigation.

Limerick District Court has been told the culprit, who was wearing overalls, a high-vis jacket and had his face covered, can be seen on CCTV approaching the cash-in-transit van after it stopped outside the bank.

However, as the driver noticed him approaching the vehicle he remained inside the vehicle and raised the alarm.

A Polish national who was arrested near Patrickswell a number of hours later has since been charged with attempted robbery and a file is being prepared for the Director of Public Prosecutions.

It is alleged that Waclaw Bartosz Stankiewicz, 37, who has an address at Windmill House, Dock Road, Limerick had planned the robbery in order to secure cash to fund a gambling addiction.

Opposing bail, Detective Garda Jason Mitchell said it will be alleged the defendant had carried out reconnaissance at the bank two weeks before the incident and that he was lying in wait ahead of the arrival of the cash-in-transit van.

“He carried out planning and research, it was a planned and premeditated crime,” he told Sergeant Michelle Leahy adding it will be alleged the defendant changed his clothes after leaving the scene.

While there was no physical altercation and nobody was injured during the incident, a knife and knapsack were recovered when Mr Stankiewicz was arrested.

Detective Garda Mitchell said the defendant’s ex-wife and children are living in Poland and that he has no ties to Limerick.

He submitted the evidence against the defendant is strong and expressed concerns he would leave the jurisdiction if released.

Solicitor Tom Kiely said his client is in a stable relationship and that his partner is living in Limerick city. He described the incident as “amateurish in nature” and said Mr Stankiewicz had cooperated with investigating gardai.

He noted the matter is likely to proceed on indictment at the circuit court and submitted it could be more than 12 months before the case is concluded given the current list of cases.

“He could spend quite a large amount of time in custody,” he said.

Judge Marian O’Leary granted bail subject to a number of strict conditions including the lodging of €2,500 in cash by an independent surety.

Read also: Woman suspected of alcohol theft in Limerick has bail conditions changed so she can go on holidays