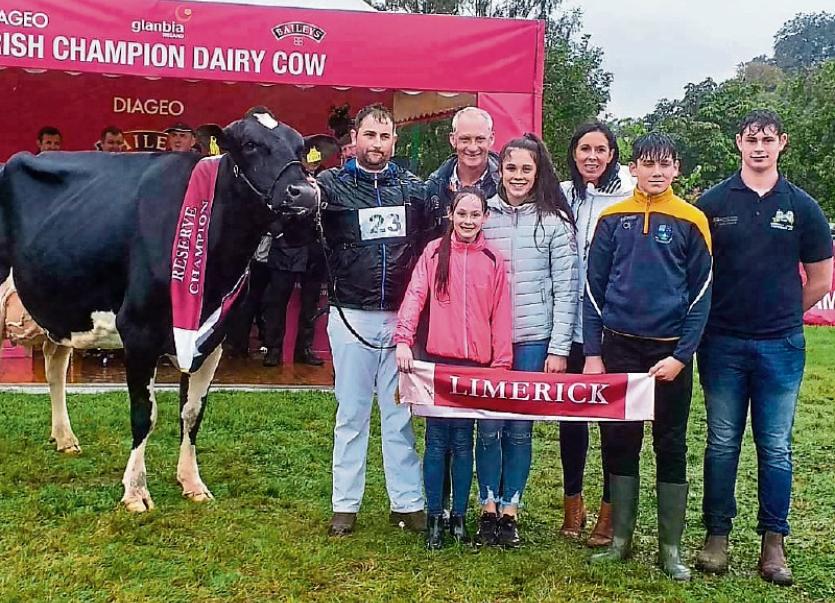 AIDAN Frawley made the long trek from Bruree to Virginia in County Cavan last week with two cows to compete in the 2019 Diageo Baileys Champion Dairy Cow competition.

This annual competition is sponsored by Diageo and Glanbia who put up a prize fund of €10,000. It is a very prestigious competition and one that every Holstein Friesian breeder in the country aspires to compete in.

Aidan, who showed at the Baileys for the first time, scooped the reserve champion award with his cow Ballytigue Gold Chip Shower. This cow is scored EX 94 and comes from a pedigree with 10 generations VG/EX dams. The pedigree traces back to the famous Glen Drummond Shower.

In this lactation she has given 16,001kgs of milk at 969kgs of solids in 305 days. Aidan said, “This is a cow I love working with. She peaked at 72kgs of milk per day this year and went in calf to sexed semen doing over 60kgs.”

The other cow Aidan competed with was Ballytigue Gold Chip Penny who is scored EX 93 also comes from 10 generations VG/EX and has the famous Lachstone Pennyrealm cow in her family. This cow finished fourth on the day at the Baileys.

While the Frawleys don’t show cows very often the Ballytigue herd competed with the best in Ireland on the day. The cows looked an absolute picture and were turned out well with the help of Stephen McLoughlin.

Aidan farms with his wife Sally-Anne near O’Rourke’s Cross and they have four children – Seán, Laura, Conor and Áine who all help out on the farm from time to time. They milk around 125 cows on a split calving system with about 40% of the herd calving in the autumn. Last year the herd averaged just under 10,000kgs of milk with 722kgs milk solids.

Aidan and Sally-Anne started the herd in 2002 and have since established it as one of the best in County Limerick. Indeed the Ballytigue herd is no stranger to the IHFA’s national herds competition having featured prominently in recent years in the over 80 cow section. This year the herd was placed second in this competition.

In July, the Frawley family hosted the European Holstein and Red Holstein Confederation Judges Conference. This conference is hosted by a different country every few years with the aim of harmonising and standardising judging across Europe. Thirty nine judges from across Europe were competing to establish themselves on the European judges panel. They were referenced against three master judges. The Frawleys turned out 42 top quality pedigree Holsteins on the day and everyone was impressed with the standard of stock on the farm.

The herd is set to reach new highs next year as it will host the IHFA national open day in the summer. This is sure to be an event for anyone with an interest in dairy cows set on a very picturesque farm in Bruree.

Minister Andrew Doyle said: “The 2019 Diageo Baileys Champion Dairy Cow competition is well known for its prestige within the pedigree dairy breeding community. It consistently attracts the best breeders in the country in a competition that recognises cows with both good commercial milk production practices, outstanding appearance and show ring characteristics.”