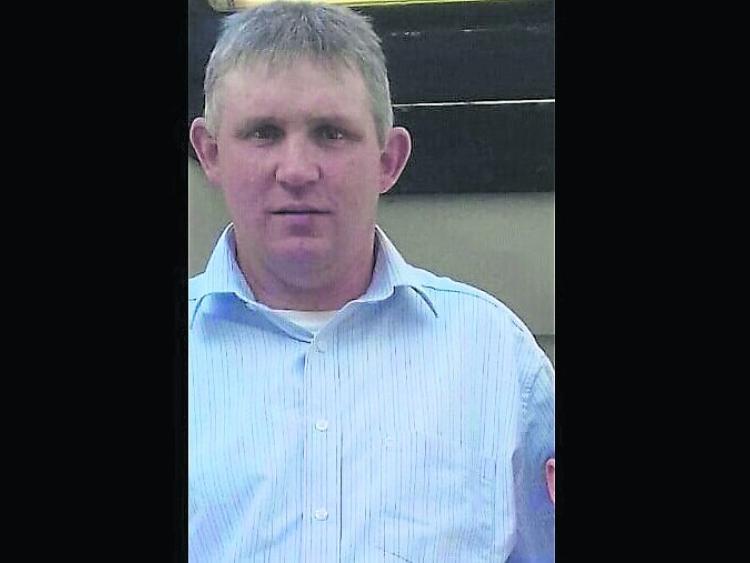 PATRICK Broderick’s trowel, a symbol of his expertise as a tradesman, was buried with him this Thursday in Abbeyfeale.

The trowel, was one of a number of gifts brought to the altar, gifts which Canon Tony Mullins said, “tell us so much about Patrick, his work, what his interests were, his love of family and his love of working on the farm and on the buildings.”

Other gifts included family photographs and “the cap he wore every day of his working life.”

“There is incredible sadness at his passing,” Canon Mullins said, “and how his passing happened.”

Patrick died last Saturday evening after a wall fell on top of him while he was digging a drain at the family farm at Dromtrasna Collins, Abbeyfeale.

“It is with a certain sense of disbelief we come together to pray for Patrick,” Canon Mullins told the congregation this Thursday.. “Who would have thought a few days ago we would be here at his funeral Mass.”

“We feel lost and helpless. It all seems so unreal and hearts are broken at Patrick’s sudden departure.”

It was, he said, the second time tragedy had visited the family: Patrick’s sister Hannah Marie had died in a road accident as a child.

“Patrick’s tragic death brings home how vulnerable we all are. A sudden death is like a power cut. One minute the light is shining, the next it is gone. In the space of a few seconds our whole world is turned upside down.”

“He was a great presence in your lives,” Canon Mullins told the family and congregation. “His loss will be felt deeply by those who loved him. His death leaves a great emptiness.”

But, he continued, the great mysteries of the Resurrection and Ascension hold out the hope of eternal life and there was strength to be gained from the support of community.

Patrick’s  sister Kathleen, told of his early love of farming and  of his early keen interest in old buildings and in building work.

“He was a gifted tradesman who could do anything with his hands,” she said. And he had a special regard for his trusty trowel, always saying it “will lay a lot more blocks.”

“It will go down with him today.”

“He never let anyone down,” Kathleen continued, telling of the many ways  he looked after their mother. “He was a fantastic son. He was very easy-going, fun-loving and kind-hearted. We will miss him dearly.”

Canon Mullins, on behalf of the family, thanked all those who had assisted on the evening of Patrick’s death: the Search and Rescue team, the gardai, the fire-service, the Air Ambulance Service, the doctors and other medics and the neighbours.

And on behalf of the community, he pledged that they would be there to support and console the family in the weeks and months ahead.

Patrick Broderick was laid to rest in Reilig Ide.