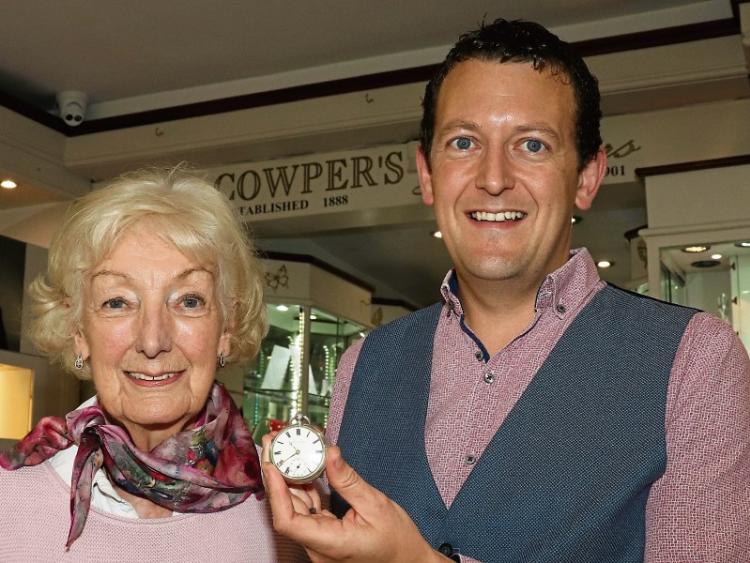 Eileen and Kevin O'Donoghue  with the silver fob watch made by their ancestor Thomas D Cowper of Bridge St, Newcastle West in 1900 PICTURE: Michael Cowhey

A SILVER gentleman’s watch, made by a Newcastle West watchmaker and jeweller 120 years ago, has made its way back to the business established in the town by Thomas D Cowper and still operating as a family business today.

But the story of how the fob watch came home via Devon was down to a click of a mouse.

Thomas D Cowper set up in business in Newcastle West in 1888 and moved into the premises in Bridge St in around 1911, where  it has continued and is now run by his fourth and fifth generation descendants, Eileen and Kevin O’Donoghue.

But it was Kevin’s cousin, Lesley Cowper, a great-granddaughter of Thomas, who turned up this unexpected piece of family history. Last week, after watching the TV programme, Who do you think you are, she went searching her family surname on the internet.  She discovered that a watch with Thomas D Cowper’s signature and details was up for sale at an antique dealer’s website in Kilrush.

The following morning, Kevin O’Donoghue headed straight for Kilrush, determined not to miss out on this rare chance to acquire a piece of family and indeed local social history.

“Not much is known about T.D Cowper who wasn’t a native of the town,” Kevin explained this week. The family’s first definite account can be traced back to a family heirloom, a ring dating from 1888.

“He honed his skills in Switzerland as a watchmaker. He also traded as a goldsmith and optician before moving to the Bridge Street shop in 1911,”Kevin explained. But he is only aware of and has ever only seen one other watch made by his ancestor and that watch is now owned by a cousin.

The watch in Kilrush, Kevin continued, was bought recently at an auction in Devon by Nigel Barnes. “According to the antique dealer, judging from the Chester 1897 hallmark, it is likely that Thomas Cowper made this sterling silver pocket watch circa 1900. The movement is imported, probably from England. It’s thought by then, watchmakers were under increasing pressure to present affordable watches to supply growing demand,” Kevin said.

“I cannot imagine what journey this watch has taken in the last 120 years but we jumped at the chance to bring this piece of history back home to Newcastle West today” said Kevin. “To us, it’s priceless.”

The sterling silver timepiece is hallmarked and has Thomas D Cowper’s name on the face. It has to be wound with a key each day but is still keeping good time. Now it will go on display in Cowper’s shop.