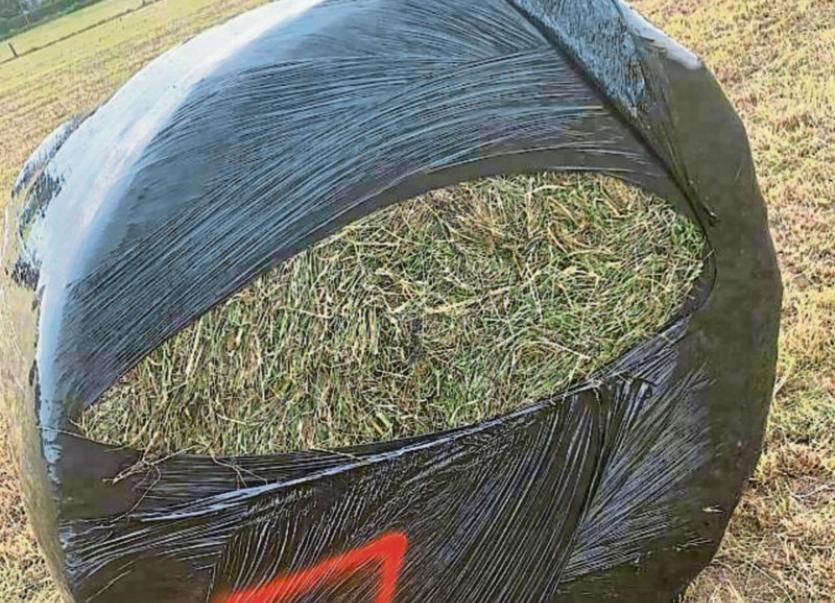 One of the slashed silage bales

THIRTY bales of silage have been slashed in the parish of Dromin-Athlacca in the second such disturbing incident to occur in County Limerick.

Last October, Farm Leader reported that 16 bales were cut in Pallasgreen. The most recent incident occurred on Tuesday, July 23. The farmer, who didn’t wish to be named, contacted the Limerick Leader to warn other farmers that this was happening.

“They were badly slashed. They had to be rewrapped. They didn’t have to be rebaled thankfully,” he said.

It is an outside farm of land that is visible from the road. Just under 400 bales were made by the contractor.

“We finished up baling at around 10.30pm and the contractor was drawing them in to the homeplace. I left the field at around 10.45pm. I got a phone call from the contractor at 11.45pm that there was bales slashed in the field. So they did it in that hour between 10.45pm and 11.45pm,” said the farmer.

He came straight over to the land but the culprit had made good their escape. They drew home more bales but couldn’t keep going all night  The farmer was back at 5.30am in the morning to see how many of the couple of hundred bales had been damaged.

“There was 30 in total. The perpetrator must have been keeping an eye on the road as they went straight across the field in a line parallel to the road. They went behind the bales and slit them.”

The farmer doesn’t know if the contractor spooked the vandals when he came back. If the criminal hadn’t been disturbed he may have slashed more bales.

The farmer doesn’t know the reason behind the criminal damage or if it was completely random.

“It’s a mystery. I don’t owe anyone anything. It’s a hard one to put your finger on.”

He contacted Farm Leader to warn other farmers that this is going on and where possible not to let bales of silage out in fields for days.

The matter has been reported to Bruff Gardai who are investigating the crime. Anybody with any information that could help their enquiries is asked to contact Bruff Garda Station on 061 382940.

Gardai arrested a man in connection with the criminal damage of silage bales in Pallasgreen last year. It is understood that there is no connection between that incident in east Limerick and what happened in Dromin-Athlacca in south Limerick.