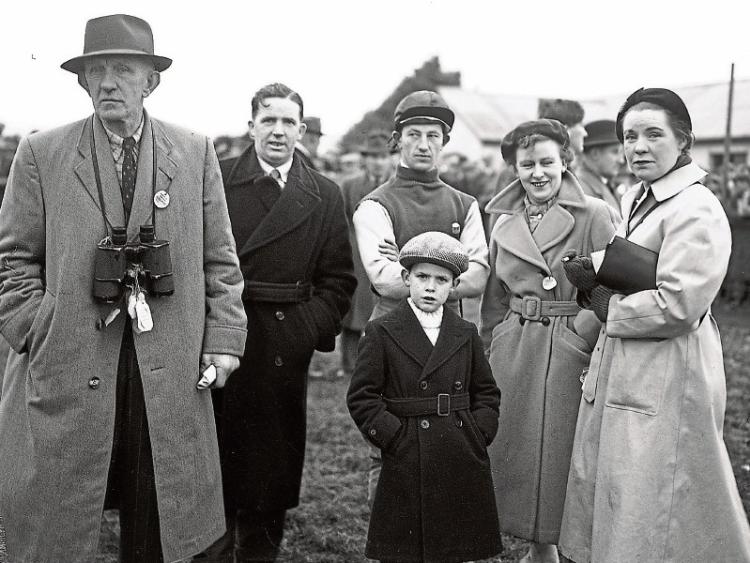 THE PHOTO above was taken 63 years ago but the faces jumped out at Dickie Power as if it was yesterday.

The Limerick Show president was perusing the pictures from the past in last week’s Limerick Leader when he saw it. It was taken at the Limerick Races at Greenpark in 1956. The caption read: “Another photo from the Christmas race meeting”.

Dickie recognised a few of the names and especially the lady on the far right Dorothy McNamara as he knows her daughter Deirdre Hogan in Lough Gur. Between the two  of them they got the full set. From the left is Captain John O’Grady, Croom; Mick Walshe, Thornhill, Lisnagry; his young son John; jockey Frank Gomez, Tory Hill, Croom; Maureen Walshe and Ms McNamara. To show what a small world it is the jockey’s sister was Dickie’s nanny!

”The only one alive now is John Walshe. He is the managing director of Callan Bacon in Kilkenny,” said Dickie, who resides in Grange.

Deirdre, a member of the County Limerick Foxhounds, went one better as she found the actual racecard. The horse owned by the Walshes was Glen Ivy. It finished down the field in the Thomond Handicap Steeplechase. The winner received 150 sovereigns, second place got 30 sovereigns and £18 10s for third.

Dickie loves seeing the old photos from the Leader archives. He is looking forward to more memories being captured at the Limerick Show this Sunday in the Racecourse.

We love getting captions for old photos so please ring us on 061 214500 with the names.