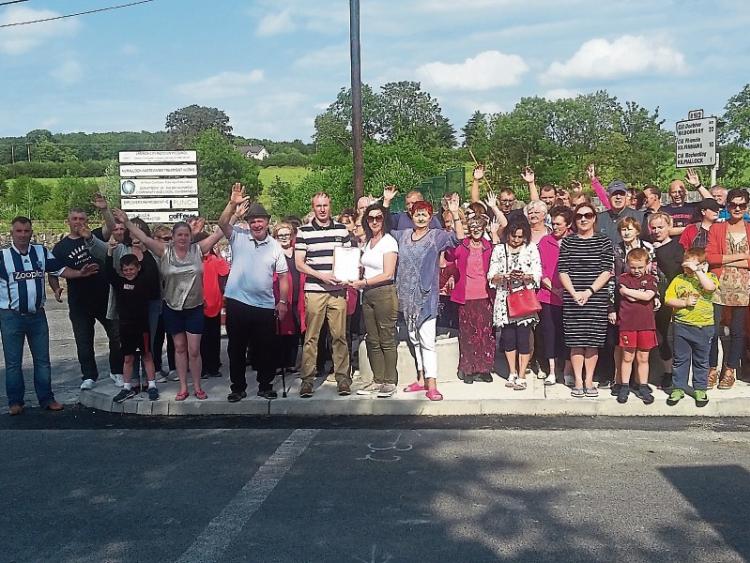 Cllr PJ Carey accepts the petition, organised by Josie Burke, against the changes to the entrance to Glenfield and Radharc na Cille housing estates

A SECOND County Limerick community have put pen to paper to voice their anger at road “improvement” works.

Close to 500 people have signed a petition in Bruree calling on the council to remove a footpath, kerb and fencing that have narrowed the road. And now in Kilmallock over 350 have put their names on a petition in one weekend. It concerns road safety at the entrance to Glenfield and Radharc na Cille housing estates across from the recently extended Colaiste Iosaef.

Josie Burke, who organised the petition, has also made a complaint to Kilmallock gardai on road safety. She says the council have basically halved the entrance in conjunction with narrowing the main road.

“It is so narrow now that when one car is coming out, depending on how far they have come out, if you are coming down the street you can’t turn in. It is too tight. You have to stop on the road and wait for them to come out. It is going to cause traffic jams.

“And that is only cars, we are not talking about trucks, bin lorries, oil lorries etc. To turn in they will have to swing out on to the wrong side of the road. And they can only do that if there no car waiting to come out. It makes no sense. They have created a problem where no problem existed,” said Josie, who has lived in Glenfield for 20 years.

She said residents didn’t get any letter from the council informing them of the change. Josie says there are often queues at the entrance in the morning and the situation will be made even worse when schools return.

“A lot of people used to swing into Glenfield to turn. The entrance is also used by buses as a pick up point. I was going to work this morning. The bus stopped at the entrance but the driver couldn’t pull in so it was stopped on the road. The traffic behind it had to wait until it moved on. There used be plenty of space to pull in off the road,” said Josie, who called on the council to make the entrance wider.

She gave the petition to Cllr PJ Carey who gave it to a roads engineer. Cllr Carey said he has met with local residents and they are “fuming”. He is calling for it to be widened.

“It’s the narrowest entrance / exit in the town for the biggest estate. All the other estates have wider entrances. A UPS van could not enter the estate last Thursday. Every resident without exception signed it. Two of the residents in the front of the estate cannot even reverse their cars now out of their driveway. No thought was apparently given to refuse collection lorries, oil lorries, coal trucks etc.The junction will have to be widened. When the secondary school reopens after the holidays it will be absolute chaos,” said Cllr Carey.

The Council has not yet replied to a media query on the matter.

Read also: ‘Strange case’ of a car that disappeared in County Limerick