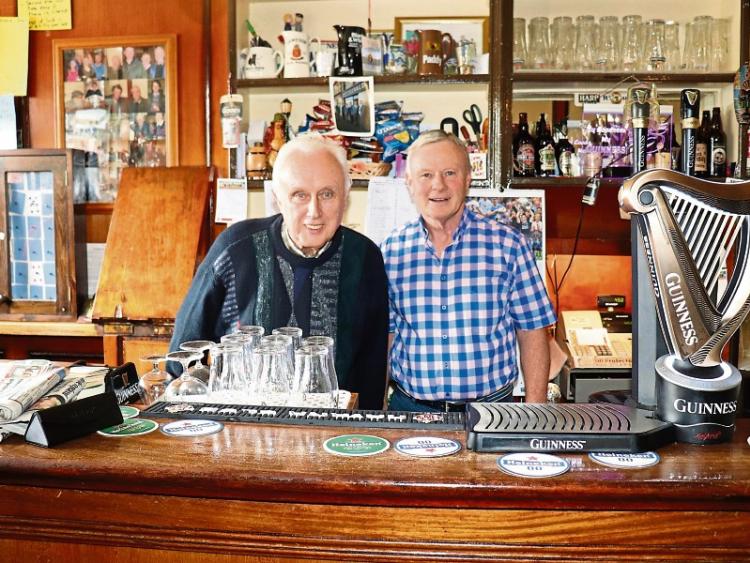 FITZGERALD’S bar in Abbeyfeale has a long tradition of being a family-run business. Still owned by John Mike Fitzgerald, it is now run by George and Margaret Browne and any members of their family who can be persuaded to take a turn behind the high counter.

But now, the bar, known locally as John Mike’s or sometimes still as Jack Fitz’s, is in with a shout to win the Traditional Bar of the Year award 2019 later this month.

And all their customers are hoping their favourite haunt will win the day.

“I was surprised,” George said when asked about being shortlisted for the award. “I didn’t expect it.”

He recalled being in the bar one day when a man and woman came in, bought a drink and had a bit of a chat with him. It was only when they were leaving that the woman let slip the magic words: “You passed.. You passed Traditional Bar of the Year.”

George admitted he didn’t even know he was being examined.

But Fitzgerald’s is, by any reckoning, a friendly spot, where little has changed over the years.  Long and narrow, customers line up on high stools along the counter and the hum of conversation and of banter is the main entertainment.  Everyone is known by name and the TV is well hidden out of the way at the rear of the pub.

“John Mike’s is known far and wide,” said George. “The people who are coming in have been coming in all their life.”

It is mostly, but not all, people from the farming community who make up the regulars. And that has always been the case, based on Abbeyfeale’s reputation as a great town  for fairs and marts. The talk, George added, is mostly about the price of land, of cattle and of course of politics. But romance has also been known to have been sparked within its walls,  he continued,

John Mike’s has a long standing in Abbeyfeale. Back in 1941, Jack and Nora Fitzgerald bought it from Nell Stack, who inherited it from her aunt.

The Fitzgerald family lived in rooms above the bar with the kitchen located to the rear of the bar.

There, Nora Fitzgerald, who was known to be an extremely caring woman, brought customers who might have had a ‘big small one’ too many, fed them up and plied them with tea until they were ready for the road again.

The kitchen finally became part of the bar in 1983, when Jack, Nora and John Mike moved into their new home next door. Last year,  the ‘kitchen’ was named in Jack & Nora’s memory and is now the spot for a sing song or trad session.

Since the bar was shortlisted for Traditional Bar of the Year,  it has also been entered in the ‘Southern Comfort People's Choice Awards’ which is decided by public vote and online only.

John Mike and the Brownes are asking people to support them.

The Bar of the Year awards will be announced at a special ceremony in Dublin on August 19. But, in a separate competition, Norma Browne, George and Mary’s daughter, has been nominated for Bar Person of the Year, the results of which will be known in October.

Read also: Newcastle West to host its last Flower Show after half a century