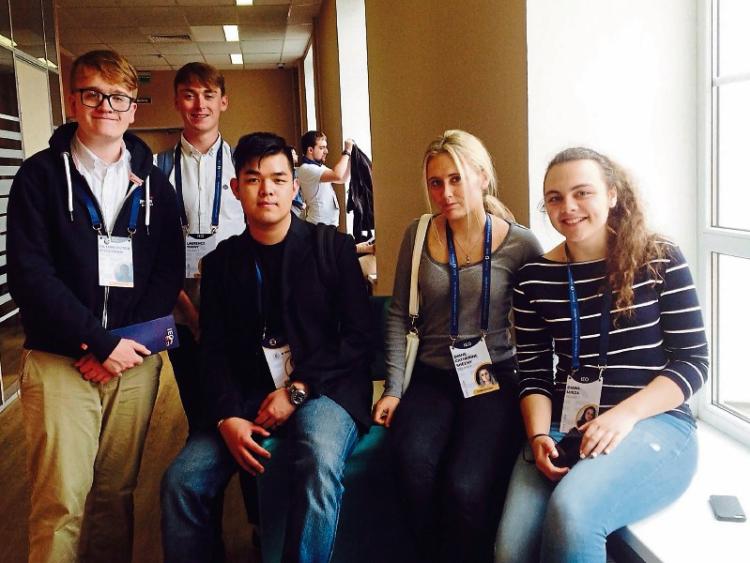 The top five from the Young Economist of the Year competition in UCD flew out to St Petersburg last week. Sihoo Kim, Rockwell College, was joined by Cillian O'Sullivan and Laurence Tuohy, Glenstal Abbey School, and Diana Mirza and Diane Sheehy, Colaiste Chiarain.

Over a thousand projects qualified for the final round of the Young Economist of the Year Competition 2019 and Limerick schools won two of the top three places.

Mairead O'Sullivan, economics teacher in Glenstal Abbey School, says she is very proud of her students and delighted to be participating in the International Economics Olympiad

“In Glenstal, we nurture students' love of the business subjects and it is great to see students competing at an international level with an academic subject,” said Ms O’Sullivan, who is joined on the trip by Pat Egan, economics teacher in Rockwell College.

Mr Egan believes the International Economics Olympiad will put Ireland on the map in the study of economics and will give great encouragement to other students interested in the field. The competition comprises a number of different rounds covering all areas of economics.

Up until now economics has been a subject that some schools have not even taught but since the crash interest in the subject has grown and grown. There is a new economics syllabus being introduced in secondary schools throughout the country in September.

The team are sponsored by all the universities, who have generously made the participation by students in this international event, possible. In particular, Professor Stephen Kinsella, University of Limerick, has given immense encouragement to the Irish team in their preparations.