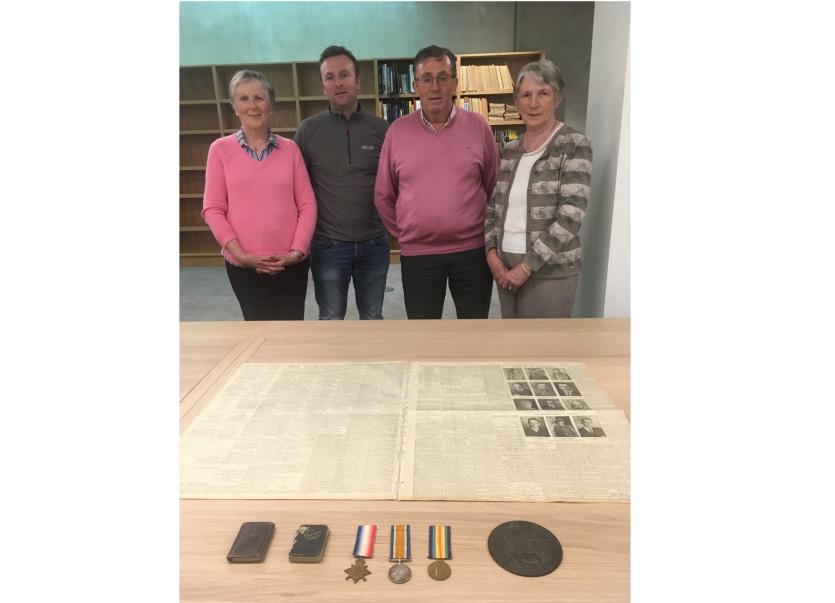 THE FAMILY of a County Limerick soldier killed in the first World War have added to a special archive collection at University of Limerick in memory of the young man.

Thomas Noonan, 23, grew up in Barrington’s Bridge, which connects the parishes of Murroe-Boher and Ahane, Castleconnell and Montpelier, joined a number of his relatives in emigrating to Sydney, Australia in May 1914.

Within a number of months, Thomas enlisted as a private in the Australian Imperial Expeditionary Force, and was killed on the front line during the Gallipoli campaign on August 9, 1915.

The memory of the young private has since been immortalised in the unique Noonan Collection in UL’s special collections and archives in the Glucksman Library, offering a “window to the past”.

The Noonan Collection already contained the soldier’s diaries from the trenches, military medals and the so-called Widow’s Penny memorial plaque received by his family.

And this week, the Noonan family have donated an original copy of 1915 edition of the Sydney Herald newspaper, which contains a feature on the County Limerick man, who was educated at Murroe national school and was an apprentice at McBirney’s Drapery Emporium in the city.

Donating the new historical piece to the collection, Thomas’ nephew Michael Noonan said that the family was “so proud” of the fallen soldier.

The Murroe man said that letters of his, written when he was just 21, were in an envelope in a press at his County Limerick home for 80 years. Michael said that his writing was “ahead of his time”.

“I visited his grave three years ago there and walked in the water where he landed. I used to look at the letters every so often when I was young, and the medals and diaries. I took an interest from there,” he added.

“We are very grateful to the Noonan family for their donation, and look forward to sharing their family history with our researchers,” he added.

Asked if he hoped students and researchers would study the collection, Mr Noonan said: “I would like to think someone would, yes.”