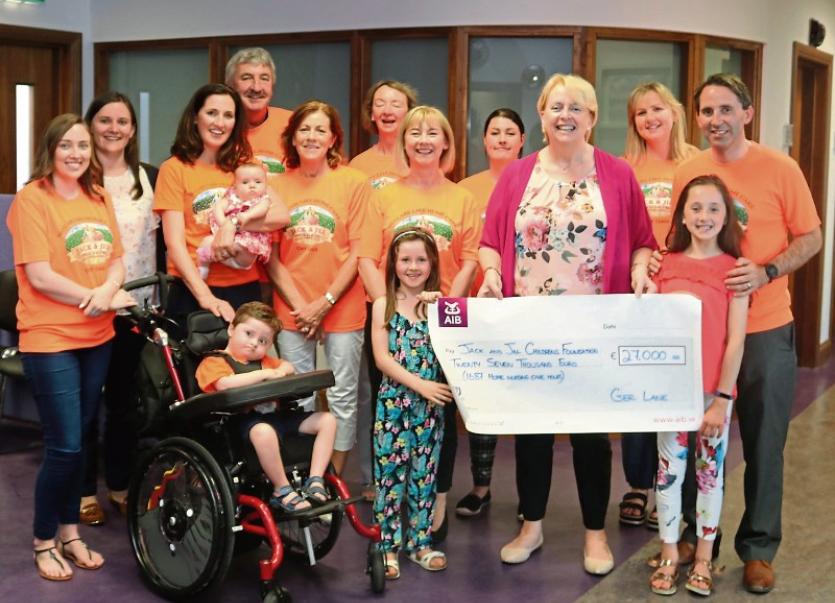 A LIMERICK GP has raised more than €27,000 for the Jack and Jill Foundation, a charity that helps hundreds of children with severe development issues, as a sign of gratitude for their help in his son’s care.

Dr Ger Lane and his wife Dr Alison English were able to muster up 25 volunteers, including staff at their Park Lodge Medical clinics, to participate in the Great Limerick Run in a bid to raise much-needed funds for the charity.

Ger says that they saw a huge benefit from Jack and Jill’s home monthly 24-hour care for their four-year-old son Matthew, who was born with Down’s Syndrome and later developed a seizure disorder called infantile spasm when he was just seven months.

“He is dependent for everything, he can’t do anything for himself, so he is non-verbal, can’t sit up and can’t hold things,” he explained.

But in November 2017, the Lane family were successful in their application to avail of the charity’s home care services, which has included 24-hour home respite care. “We had plenty of help from our family, and we were trying to be self-sufficient, so we were kind of reluctant initially to use what other people might be dependent on. In the end, we were pushed towards it.”

That was when Matthew was introduced to nurse Grainne Egan, who has provided the family with huge assistance since late 2017. He said they were “conscious to contribute as a thank you” to the Jack and Jill Foundation as Matthew will no longer be able to avail of their services once he turns five.

Ger said it was a great opportunity to blend physical and wellbeing elements of the workplace together on the day. He adds that Matthew is in good hands as he has three adoring sisters, ages nine, seven and three months. And there will always be a doctor close by for the family, as Ger, his wife Alison and his father-in-law John English are all seasoned GPs in Limerick!

Read also: Huge excitement as Tiny the dog is found 11 months after being stolen