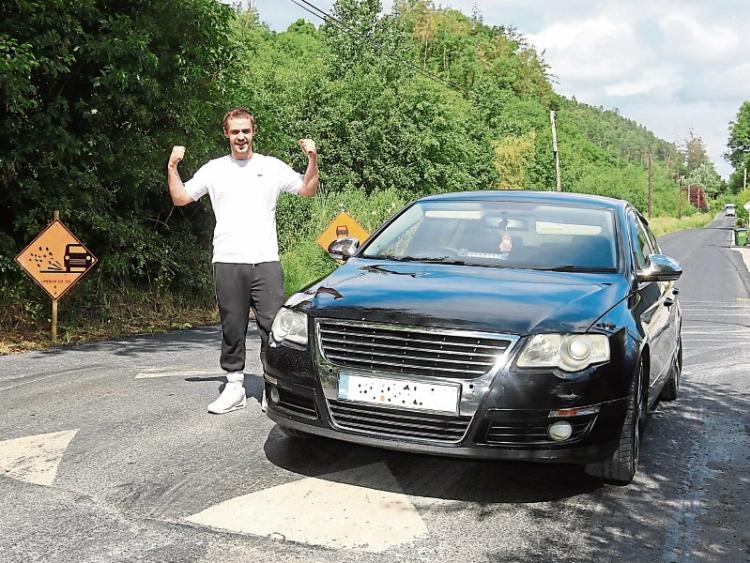 Christopher Fitzgibbon: 'If I won the Euromillions I wouldn’t get half the excitement. It was just sheer pressure that was put on them'

CHRISTOPHER Fitzgibbon has been on quite the journey and it isn’t over yet.

The Galbally man came to local and national prominence last October when he made page one of the Limerick Leader and appeared on the Joe Duffy Show. The Daily Mail in the UK even covered his story. He claimed a pedestrian crossing, which was constructed as a safety measure, is an accident waiting to happen.

He said his 06 Volkswagen Passat, which is lowered, is unable to surmount the raised pedestrian crossing outside the national school in Galbally due to its height. Chrstopher said his vehicle got stuck on top of the ramp.

“I’ve asked the council to remove or rethink their ramp and they are not willing to do anything about it and it’s over a month on,” said Christopher in October. The council said it has been constructed “in accordance with specific guidelines”.

Matters then took a turn for the worse for the 24-year-old last March. Christopher said he couldn’t drive into Galbally at all due to new ramps that were erected.

“Every entry point into the village is covered now. There was one ramp initially outside the school and now there are two each on the Tipperary and Mitchelstown roads out of Galbally. They have blocked every road into my local village with these big speed ramps that my car can’t get over. We have an additional four speed ramps in Galbally now,” said Christopher, who has also contacted Taoiseach Leo Varadkar, Minister for Transport Shane Ross, local politicians, RSA, gardai and the Office of the Ombudsman on the matter.

“I feel discriminated against because I’m being classed as a young boy racer but I pay my motor tax, my insurance, have my NCT but yet I can’t go to my local shop, post office, pub, church. My cousin’s confirmation is on in April, I can’t even get into that,” said Christopher last March.

Asked if he could crawl over the ramps at very low speed, he said he couldn’t.

“I couldn’t without damaging my car. The ramps are six inches. The lowest point of my car is four and a quarter inches,” said Christopher, who added that his appeal to the council to lower or remove the ramps has fallen on deaf ears.

However, it’s a long road that has no turn and Christopher got some good news last week. He heard there were roadworks on the Tipperary road out of Galbally.

“They raised the road on the approach to the ramp and I can drive over it now. It’s still a slow process but it’s not damaging my vehicle now. I was in the village for the first time in months. I couldn’t go to my cousin’s confirmation – I missed that family event over it,” said Christopher, who describes getting the news of the works as “massive”.

“I haven’t hardly slept in two days since I’ve realised this has been going on. If I won the Euromillions I wouldn’t get half the excitement. It was just sheer pressure that was put on them. The council fought me the whole way. I am calling for an apology from the council,” said Christopher.

He isn’t planning on stopping his campaign now. Christopher has even ordered stickers for his Passat with the wording “The Ramp Champ”.

“It’s great to have my journey time and mileage cut down now that they have raised the road coming up to one ramp but I won’t stop until the other monster – on the road heading to Lisvernane – is lowered. I have come this far, I won’t stop now. I could be running for politics next time!” said a jubilant Christopher.

Limerick City and County Council declined to comment on a media query from the Limerick Leader on the matters raised by Christopher.