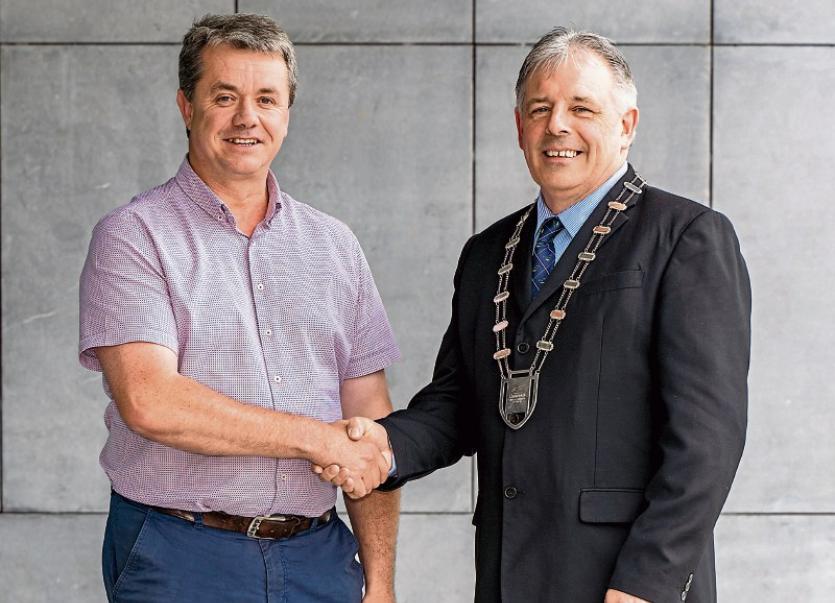 He said rumours about “certain sectors of community being housed there” were false.

“The land has been zoned industrial and I look forward to new companies setting up there,” said Cllr Donegan. Prior to the election, he announced that the council had purchased Kilmallock Business Park. It was then that the rumours started.

Cllr Donegan was proposed by Cllr Martin Ryan and seconded by Cllr John Egan. He takes over from Cllr Eddie Ryan. As a first time cathaoirleach of the municipal district, Cllr Donegan said he “was honoured”.

“People have put their faith in us to carry out our duties with professionalism and dignity,” said Cllr Donegan, who paid tribute to former councillors Lisa Marie Sheehy, Noel Gleeson and Bill O’Donnell who didn’t seek re-election. He welcomed new councillors Martin Ryan and PJ Carey and the returning John Egan, who served in the old Castleconnell area. Cllr Donegan welcomed back councillors Brigid Teefy, Eddie Ryan and Ger Mitchell. Cllr Donegan praised the area staff under the leadership of Sean Coughlan and Brendan Kidney.

“We have led the way. We are the best municipal district,” said Cllr Donegan. Cllr Martin Ryan was elected leas cathaoirleach after being proposed and seconded by Cllr Eddie Ryan and Cllr Mitchell.

“It is a great honour to be elected as a councillor and then to have this honour as well is a great personal achievement. Thank you for your confidence in me,” said the Cappamore man, who vowed to do his best for the people of the municipal district.

Cllr Teefy, who topped the poll as an Independent, took issue with the Fine Gael and Fianna Fail pact. She said power should be shared.

“We are all elected to the area. We’ll see what happens down the road,” said Cllr Teefy, who pointed to fellow Independent, Cllr Emmett O’Brien, being elected leas cathaoirleach in Adare-Rathkeale.

The councillor with the biggest smile was John Egan. After he narrowly lost his seat five years ago he said he would win it back as long as his health was OK. “I got a bit of a knock out [cancer of the oesophagus] but I am glad I fulfilled my promise. I’m looking forward to working with the team for our area,” said Cllr Egan.