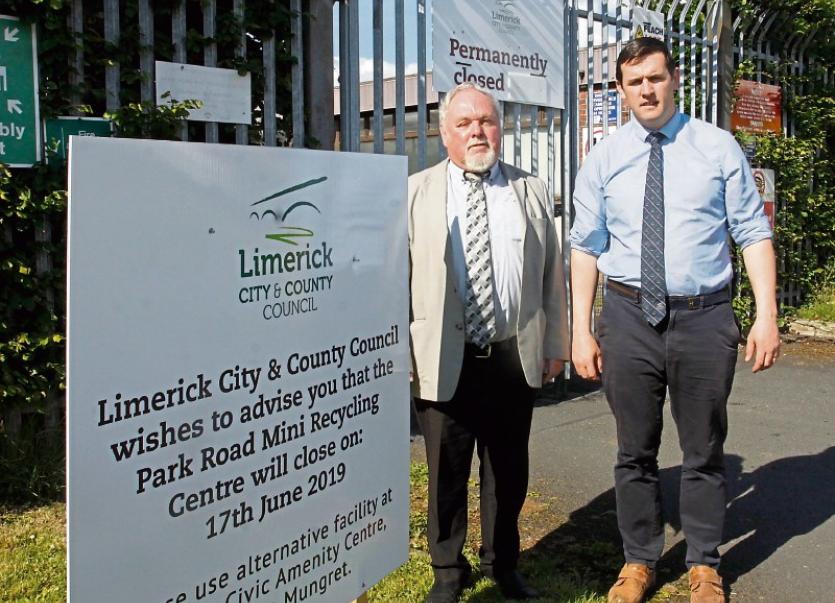 A COUNCILLOR has claimed that an agreement had been negotiated with Limerick City and County Council that the Park Road Recycling Centre would not be closed, at a pre-budget meeting last winter.

This Monday, the mini recycling centre closed down due to “health and safety” concerns. But this decision has been met with frustration by councillors, who are now calling on the council to reverse the closure.

This Thursday at 4.30pm, a special meeting is being convened to discuss the matter at County Hall in Dooradoyle.

Independent councillor Frankie Daly, who topped the poll in Limerick City North in this May’s elections, told the Limerick Leader that at a council budget meeting on November 18, there was an agreement the centre would not be closed.

He said it was “an agreement that I had successfully negotiated as one of my stipulations for my support for the budget. This agreement was reached in the presence of former councillor John Gilligan with the head of finance acting on behalf of the Chief Executive Conn Murray”.

However, Limerick City and County Council has robustly repudiated this claim.

“Limerick City and County Council refutes the assertion made by Cllr Frankie Daly that promises were given at a pre-budget meeting last year that the Park Road Mini-Recycling Centre would remain open,” a spokesperson said.

“It is utterly false to suggest that an agreement was reached between the Head of Finance and the councillors named in the statement. This has repeatedly been conveyed to the councillor since the announcement was made that certain items would no longer be accepted at Park Road. A decision to remove some of the facilities available at Park Road was only made in 2019 following a Health and Safety review of the location.”

Cllr Daly said he was shocked to learn of the proposed closure of the mini recycling centre.

“This is totally hypocritical, in a time when we should be promoting the opening of recycling facilities and trying to encourage everyone to be more responsible about how and where they dispose of waste. Our citizens use this facility on an ongoing basis especially elderly residents who don't drive. The nearest other recycling centre is at the Dock Road which is very inconvenient. We need more facilities at this side of town and should not be closing them down.”

The council said that in the interests of safety, it was decided to close the centre this week. The bottle bank remains open.

The council added: "Members of the public will no longer be able to leave paper/ cardboard, small electrical/ white goods or batteries at the Park Road site.

"At present, anyone who has a regular bin collection ‘Wheelie bin’ service can recycle their paper/ cardboard in the recycle bin provided by their service operator, which, is collected at their front door.

"Batteries can be left for free at any shop that sells batteries, while small electrical/ white goods can be exchanged at the point of sale when buying new items. Alternatively, members of the public can use the Mungret Civic Amenity Centre.

"The public will continue to be able to deposit their glass, cans and textiles in Park Road, while it is planned to improve the physical area around the Bottle Bank in the coming months."