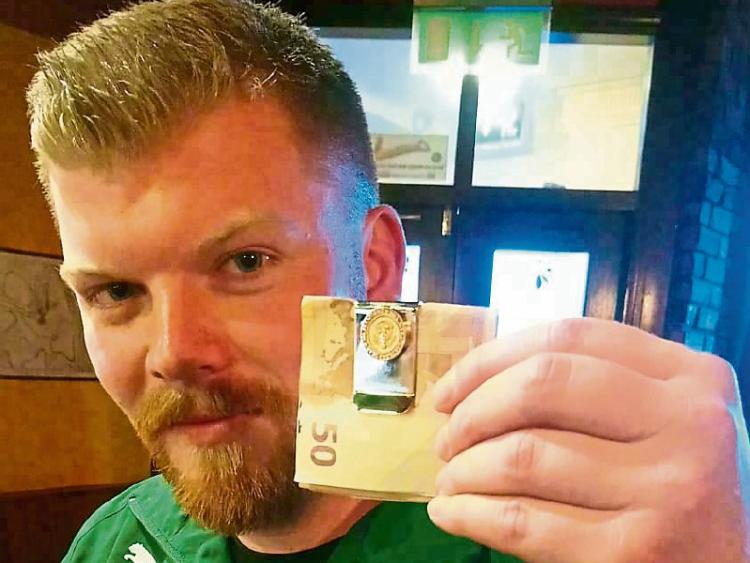 Martin Doyle with the holder – one of a very few the president gives out. Piers Morgan was also given one following his interview with Trump

A Limerick man has received a priceless gift from the US secret service following Donald Trump’s visit.

Martin Doyle, 28, from Clareview, is a huge fan of the American president, and was lucky enough to meet two members of his security, who spent a night drinking in the riverside bar in the city, where he works.

Later that week, Martin journeyed to Doonbeg hoping get a word with President Trump himself.

Wearing a sweater bearing the line: "Donald Trump, finally someone with balls", and draped in an American flag, he was spotted by the president’s son Eric Trump, who was taking in pubs in Doonbeg alongside his brother Donn Jr.

“The minute he saw the jumper and saw what it said, he pointed over at me, and said ‘there’s a great man there, come over and shake my hand,” Martin recalled, “I asked him to give my regards to his father. I am a big fan of his.”

Martin was pictured by a Reuters photographer, and quoted in global media.​

Back behind the bar the following day, the US secret service, having remembered him from earlier in the week, returned, to present a delighted Martin with a unique money holder, which has the official presidential seal, and is engraved with the autograph of Mr Trump.

Taking up the story, Martin said: “I was working Thursday night, and I looked out of the window, and a blackened Mercedes van pulled up, and this big man got out. He opened the sliding door, and out came a man and a woman. I served them their drink, and was once again chatting away to them. The woman told me she had been involved in the Trump visit, and spotted me in the newspapers. We were chatting away. Eventually, they called me over, as they wanted to give me the present.”

“He took out this lovely pouch and inside of it, there was this golden money clip,” Martin smiled, “It was special. I’m not going to use it. I might frame it. It’s something I will treasure.”

Martin had a picture taken of his shaking hands with Eric Trump – and is trying to track down the owner. If you can help, please contact 061-214596.