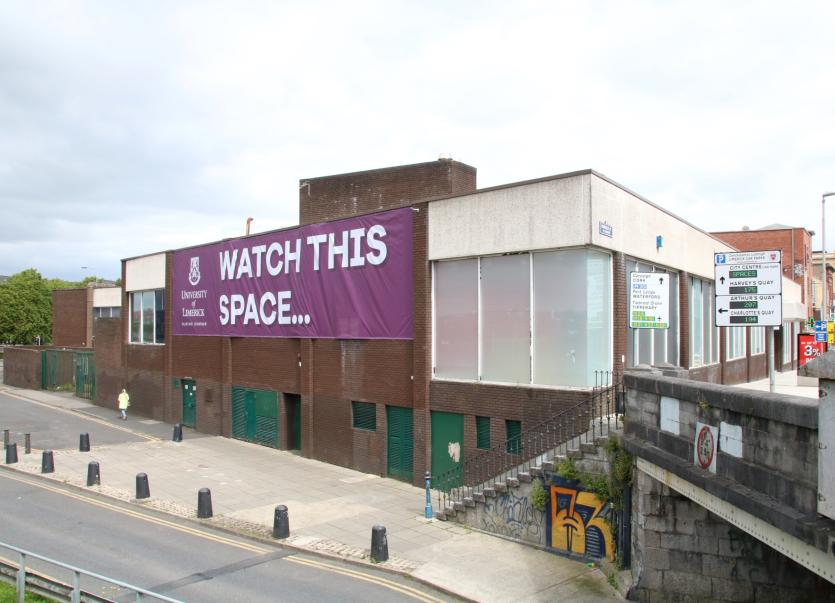 Watch this space: The banner was erected this Thursday afternoon | Picture: Adrian Butler

MEMBERS of the public have reacted positively to the first visual sign of activity at University of Limerick's new city centre campus site.

A giant purple banner, emblazoned with the message "Watch this space" and the UL logo, was erected at the former Dunnes Stores at Honan's Quay this Thursday afternoon.

This is just weeks after UL officially signed the contracts for the €8m purchase of the site, on May 24.

Anxious to get going on our @UL city campus #WatchThisSpace pic.twitter.com/5of9TdN5Oq

It was announced on April 5 that UL would purchase the building which had been vacant for a number of years.

It may just be a banner on an old building. But this is proof that after 11 years of inactivity something is finally going to happen at the old Dunnes building in Sarsfield St following @UL purchase of it. #WatchThisSpace @Limerick_Leader pic.twitter.com/BFaVeQWNtg

UL president Dr Des Fitzgerald said that the new development will "contribute in a major way to the city’s rejuvenation".

It has started. First step on the beginning of a new journey for #limerick in so many ways. #watchthisspace pic.twitter.com/ha5TcCLqWj

“Connecting this campus with the city has been a dream for everybody associated with the university for years,” he said.

This is incredibly exciting for Limerick. A huge, vacant eyesore in the city centre is soon to be transformed! https://t.co/EDLAJ5rz6L