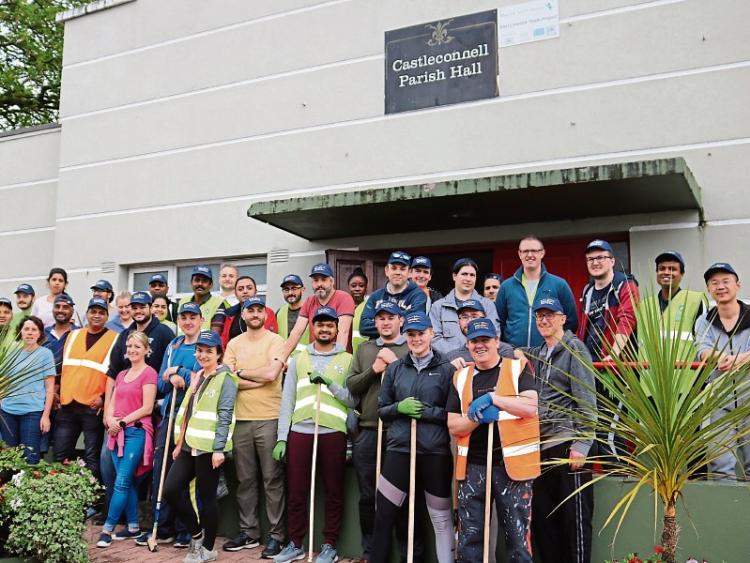 CASTLECONNELL Tidy Towns members jumped from nine to 126 thanks to Johnson & Johnson.

Staff from the company’s Limerick-based EMEA Development Centre volunteered to help out the village’s Tidy Towns team on Thursday.

John Hardiman, chairman, said: “As you can imagine coming from a committee of nine, to having an extra 126 pairs of hands was a terrific boost.”

After some rapid planning sessions, last week the team rolled in to Casteclonnell on buses and in their own cars. Locals, Pauline Bradshaw, Mags Byrnes, Terri Pool, Eileen McCabe O’Brien and Julie McCabe had scones and beverages ready to feed the 126 volunteers before John put them to work.

“The teams were organised into eight and allocated sections of the area to tackle. In the morning most of the work was focused on weeding. This year Castleconnell Tidy Towns tried to eliminate the use of herbicides.

“Unfortunately, the damp weather was ideal for weed growth and we were not able to keep all areas in check. The EMEA Development Centre team made a fantastic difference and all roads were tackled very efficiently,” said John

After a brief lunch in conjunction with Black & Green, Daly’s Cross Service Station and SuperValu, the last of the weeding was completed.

For the remainder of the day, the teams laid 14 ton of sandstone chippings at two landmark locations - the welcome stone on the back road and the floral boat at Chapel Hill; spruced up a wall near the graveyard and gave several items at the Ferry Playground area a makeover.

“The finished items looked terrific in afternoon sunshine. The other significant task was managed by the planting team of Margaret Freeney, Anne Hayes, Terri Poole and Linda Hardiman, who helped to coordinate a wide variety of new flowers at Daly’s Cross, the village garden, village pump, playground and Moran’s bed. The transformation was startling,” said John, who described it as a “wonderful day” for their community.

He said they could not have done it without Paddy Tuohy and Mike Freeney who distributed the flowers and helped collect over 100 bags of weeds, leaves, and general debris at the end of a long day.

Castleconnell Tidy Towns would like to especially thank Donncadh O’Leary for his leadership on the day and Ciara O’Brien for helping to get the project off the ground.

“The people of Castleconnell will never forget the day that Johnson and Johnson EMEA Development Centre team came to town! A fantastic group of people from 26 countries with an outstanding work ethic and a steady smile on their faces,” said John.

Last year, Castleconnell Tidy Towns received 320 points and a bronze medal. John and his fellow committee members are going for a silver or gold medal later this year.