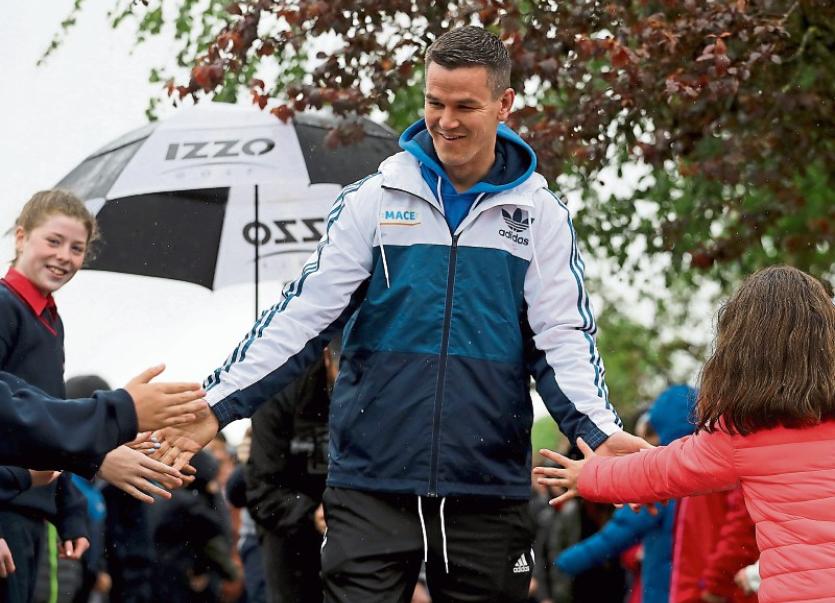 BOYS and girls in Caherline NS learned a valuable lesson on Monday – you reap what you sow in this life.

Their thoughtful surprise for Fr Pat Currivan, who has served the parish of Caherconlish/Caherline for 41 years, was rewarded with a visit from Lions, Ireland and Leinster legend Johnny Sexton.

Principal of Caherline NS, Gearoid Power said it all began with a chat between himself, Fr Currivan and former principal Mike McCarthy in the staffroom in 2017.

“Fr Currivan was telling us the story how he lost his two All-Ireland minor medals for Tipperary in 1952 and 1953. When he joined the priesthood he had to give up hurling. His mother sent him the medals with a lot of fruit but never told him.

“When he got the bag the fruit was rotten so he threw the bag into the bin. A week later his mother rang him and asked him did he get the surprise. She said she put his two All-Ireland minor medals in to the bag. He said they were gone out with the rubbish,” said Mr Power, who was the then sixth class teacher.

He and Mr McCarthy told the fifth and sixth class pupils the story and challenged them to do something about it. Like Johnny Sexton, they rose to the challenge. The boys and girls held a bake sale, raised money and found exact replicas of the medals. They asked JJ Keneally Jewellers to make the medals, sourced old team photos and put them all together in a frame. The children then presented it to Fr Currivan at a school Mass.

“He was absolutely blown way. It was such a lovely thing that the kids did for him. Fr Currivan is an amazing man. It was wonderful of them to do such an act of kindness for him,” said Mr Power.

In a story in the Leader in November 2017, Fr Currivan said: “It was a total surprise. I didn’t know a thing about it. I thought I was just saying Mass. They brought up the presentation at the beginning. I’d like to thank the children for their thoughtfulness.”

“MACE is determined to contribute positively to the communities they serve to lead a healthy, active lifestyle filled with acts of kindness and Johnny is also a great role model for young people in communities all over Ireland,” said Mr O’Connell.

Mr Power said by dong something kind a lot of good can come out of it.

“The children really saw that as they were rewarded with Johnny Sexton coming to the school. He is a superstar – the current World Rugby Player of the Year. It was great to have a player of Johnny’s stature pass on some nuggets to the students, especially as it can’t have been easy for him coming into a Munster rugby stronghold! The students had a wonderful day and I want to thank Johnny and MACE for making it happen.

“It was an unbelievable experience for the school. It’s a day we will all remember for the rest of our lives,” said Mr Power