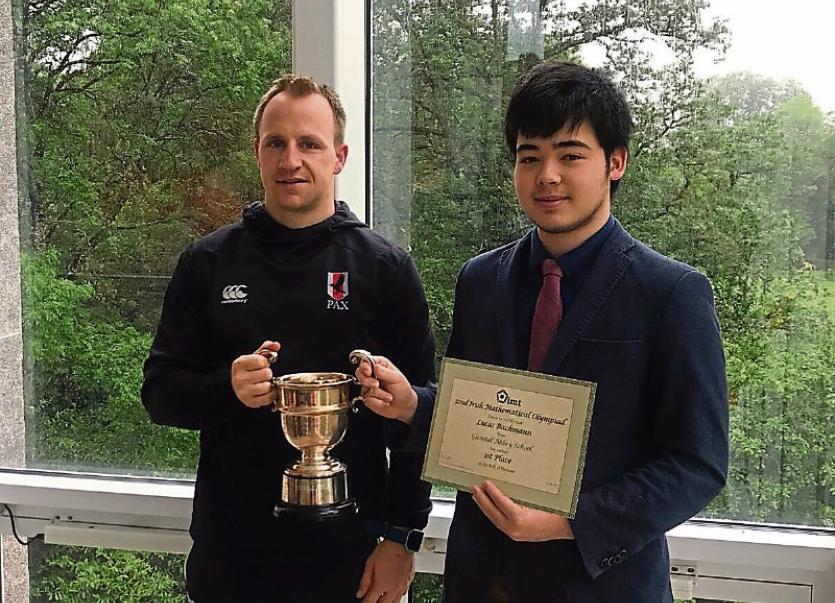 THE HONOURS maths papers on Friday and Monday will be like adding two and two to Glenstal Abbey School’s Lucas Bachmann.

The Croagh student has won the Fergus Gaines Cup in the 32nd Irish Mathematical Olympiad –  the top award in mathematics in Ireland.

Lucas will travel to Bath in July to participate in the International Olympiad for 2019, once the small matter of his Leaving Cert is completed!

It is another All-Ireland success for the county as the head of mathematics in Glenstal Abbey School, Thomas Franklin, is also from Limerick.

Fr Denis said Lucas’ journey to becoming the very best student of mathematics in Ireland didn’t happen overnight. He has taken part in numerous maths olympiads going back to 2016. The sixth year even took part in the Iranian Geometry Olympiad in 2018 where he won bronze.

“These are all hugely challenging events and can be very long in duration. The commitment and ability shown by Lucas himself has been incredible. Of course, he continues to be very modest about it all, which is admirable.

“I wouldn't even be sure we know about all of his achievements, you would nearly need to interrogate him to know!” said Fr Denis.

Glenstal Abbey School had another reason to celebrate this week as past pupil Ben Healy scored a try and kicked four conversions in Ireland U20s 42-26 defeat of England U20s in the World Rugby Under-20 World Championships on Tuesday in Argentina. Next up for Ireland is Australia on Saturday at 2.30pm Irish time.