Limerick school remembers those who inspired its students 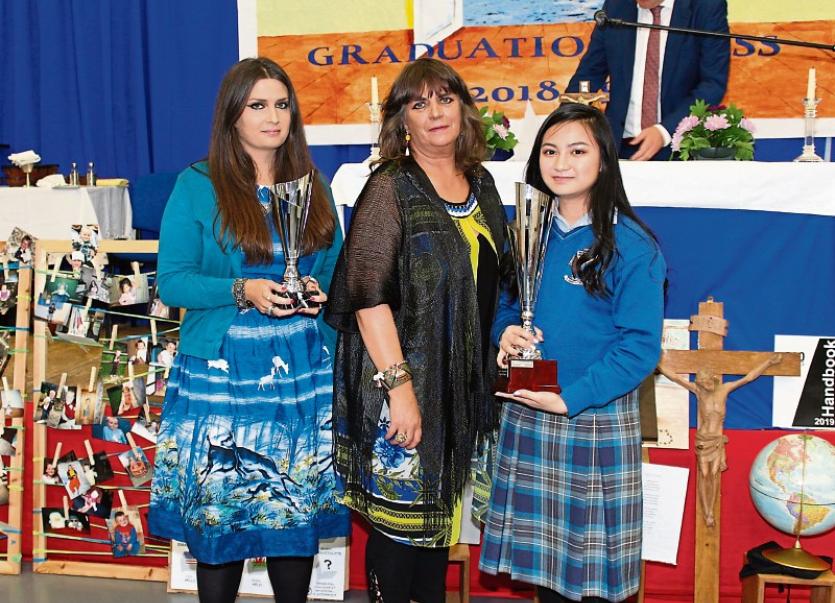 THE influence and inspiration of two talented, passionate artists from Abbeyfeale will live on after their deaths, through special awards established in their memory and presented for the first time during the Leaving Certificate graduation ceremony at Coláiste Ide agus Iosef last month.

The awards were made in honour of Liam Flynn, a brilliantly gifted artist in wood,  and Jim Vaughan, a dedicated art teacher at the school.

Announcing the  Liam Flynn Perpetual Award for excellence in the practical subjects, principal Liam Murphy reminded the 700 people gathered in the school for the ceremony that Liam  died suddenly in 2017.

“When Colaiste Ide agus Iosef officially opened back in 2014 it was a Liam Flynn piece that was presented to the Minister of Education on her visit. He and his family have a long association with education in the town and this award will reward students who follow in his footsteps striving for excellence in the technical subjects.”

The first winner of the award was Alex O’Connor who was presented with the trophy by Liam’s partner Mary Leahy. Alex, Mr Murphy said, “has a passion and talent for practical woodwork and his skills have grown incrementally since he first arrived in the woodwork room.

“He has always endeavored to produce his absolute best work, seeking out advice from teachers but also from other sources as he took charge of his own study.

“The second award for excellence in the creative arts honours the memory of Jim Vaughan who was the art teacher in Colaiste Ide agus Iosef until his retirement a few years ago. Jim died in the past year and the first recipient of the award was named as Rosheene David.

Rosheene was taught by Jim in her first year at the school and afterwards by Keith O’Rahilly. “She is outstanding in the area of life drawing, painting and still life drawing and has also shown great aptitude in the area of Art History,” Mr O’Rahilly said, adding that she also showed openness to new approaches.  “She is a student with great determination and drive and has acted as an ambassador for this subject. This winning blend of humility, talent and work ethic is why she was chosen for this inaugural award.”

Jim’s widow and daughter, Geraldine and Eva Vaughan, made the presentation to Rosheene.