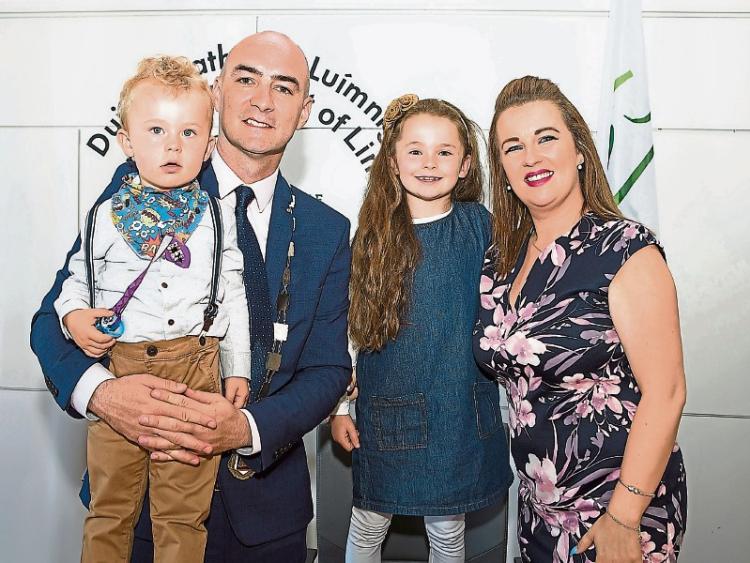 AS his year as the metropolitan mayor comes to a close, Fine Gael councillor Daniel Butler has reflected on a positive period in charge.

The Raheen-based councillor has centered his time as leader of the metropolitan district on honouring some of the many unsung heroes in Limerick, affording them mayoral receptions, and celebrating their achievements.

”I’ve met lots of very interesting, incredible people who do incredible things across Limerick, sometimes in the background, but making a huge difference,” Cllr Butler said, “Something that was reinforced to me across the year was the magic of Limerick, and its people. We have some incredible people in the city who have this can-do attitude to get on with things, get stuck in and make a difference.”

The metropolitan mayor – who will step down from his role later this month – committed to having one reception at City Hall each month, and over the year, he has honoured many groups of people, including inspirational women, and in one emotional evening in the chamber, young carers who provide support to older siblings, parents and relatives who are sick or unable to care for themselves.

Cllr Butler took the decision to honour three people at each occasion to allow the opportunity for networking.

“Not only are we learning about them, they were learning about other people who were doing something similar in their community and spreading the word so more people can hear about what they are doing,” the Fine Gael man added, “It was a learning experience, so I’m delighted I had the opportunity”.

At the start of his term in office, the metropolitan mayor wanted to keep the issue of mental health front-and-centre, and keep the conversation going around this topic.

But it was often the simple things which he enjoyed the most – for example, affording to the office of metropolitan mayor to the public.

“Meeting young people who could not believe they were meeting the mayor: to see their faces light up and give them my time and make them feel special for that moment. Being a parent myself, it’s nice. Even going to my kid’s creche, and they are asking for my autograph. I felt I finally had made it,” he laughed.

The end of his year in office is tinged with a little sadness, after it was confirmed Cllr Butler will be the last of five metropolitan mayors, the office being abolished, and his successor being known by the less-grand title of Cathaoirleach of the metropolitan district.

Many – including former councillor John Gilligan – have been voiciferous in their opposition to this, believing it brings to an end the storied history of the city’s first citizen.​

It’s something Cllr Butler agrees with, saying: “From talking to people around the city, they feel a real sense of loss. There is a long-established history there. It’s one of the oldest in the world, even older than London. I think there is a value in having that position there.”

He does acknowledge he is “conflicted”, saying it will at least bring to an end the confusion of having two mayors in Limerick.

“But it’s still a pity we are breaking the line with history. It’s a great honour to be a part of Limerick history, but there could have been a more positive way to be a part of it, rather than being the last mayor associated with the city,” he concluded.