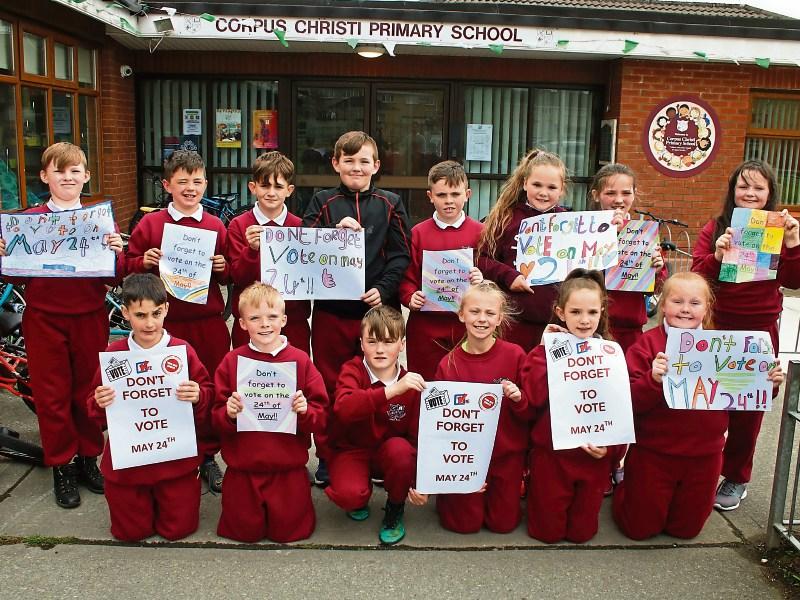 The message is clear from these fourth class students from Corpus Christi School in Moyross  PICTURE: ADRIAN BUTLER

NINETEEN candidates are vying for seven seats in Limerick City North at this election.

A variety of factors have made this, the only true all-urban district, notoriously hard to predict.

Not only have Cllrs John Gilligan, Michael Hourigan and Vivienne Crowley headed for the exit door, leaving thousands of votes behind them, but the district has been expanded to include the Singland and Garryowen areas.

Perhaps mindful of this, and Cllr Gilligan’s voter base, Sinn Fein has gone for what many see as a risky three candidate strategy.

Back in 2014, the then councillor Maurice Quinlivan topped the poll with votes to spare, many of these heading the way of the Independent member.

Quite notable in this case is the fact Sinn Fein has profiled several areas and modified its posters accordingly in terms of the order of preferences it is asking its core vote to give.

The transfer of Garryowen to City North has prompted long serving coucillor Kieran O’Hanlon to switch from City East.

He will be joined on the Fianna Fail ticket by Clonmacken activist Pat O'Neill and Christy McInerney, Corbally.

Speaking of Corbally, this is set to be a key battleground, with Labour’s Conor Sheehan, Mr McInerney, Fine Gael’s Denis McCarthy and the Social Democrat Kieran Walsh all having their base there.

Fine Gael has picked four councillors as it bids to see who can capture the huge vote that Cllr Hourigan has enjoyed over the years. The party, many feel, has once again overcrowded its ticket north of the Shannon, with four candidates running.

Olivia O'Sullivan, Caherdavin, Eleanor McSherry of the Ennis Road, Brian O’Connor, Kileely and the aforementioned Mr McCarthy, who missed out in 2014, are all running for the party.

Former mayor Kevin Kiely is running as an Independent in a move which could eat into Mr O’Connor’s vote, with the pair both hoping to poll strongly in Kileely and Thomondgate.

There are high hopes in the Green Party that Clancy Strand man Brian Leddin can make a breakthrough.

The party sent its front bencher, the former Communications Minister Eamon Ryan to canvass with him this week.

This, and the support his mother Kathleen enjoyed over the years, puts him in with a shot, one activist telling this reporter he represents “our best hope in 30 years in Limerick”.

Labour, which has not fully recovered from its 2016 General Election performance is running what many feel is a risky strategy, with Mr Sheehan and housing campaigner Anne Cronin, based in the Ennis Road.

Their former member, Cllr Frankie Daly, who won a seat for the party against the odds in 2014, is now an Independent, and due to strong familial connections among other things, is expecting to poll well north of the Shannon.

Solidarity will hope its sitting councilor Mary Cahillane - who replaced Cian Prendiville on the council last year - can repeat his feat.

And there is a husband-and-wife team on the canvass - both Desmond Hayes and Ruth Clarke are running as Independent candidates.