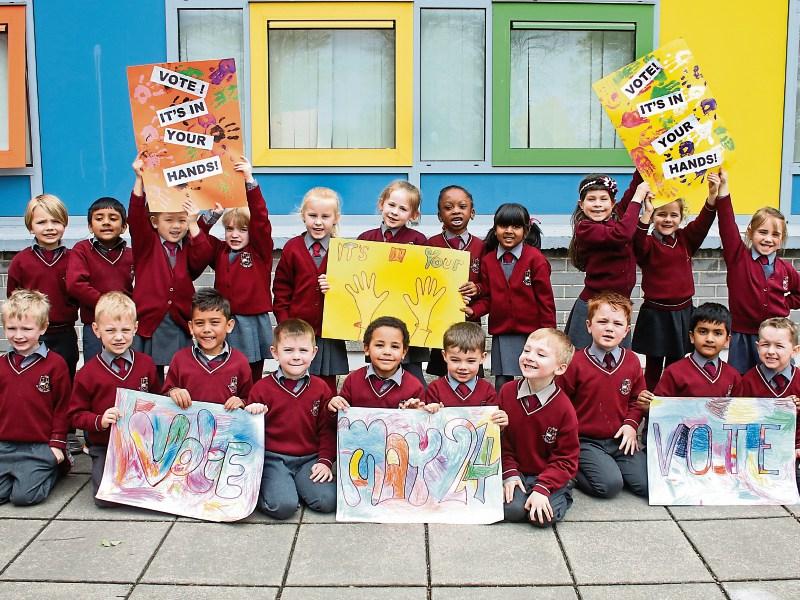 You have to hand it to them, these junior infants from St Paul’s National School certainly have the right idea to persuade us to get out and have our say!  PICTURE: ADRIAN BUTLER

SEVENTEEN candidates will slug it out for seven seats in Limerick City West, an electoral area which stretches from the Walls of Limerick to the green fields of Clarina and Patrickswell.

It is here, a district which covers much of the central business district, where many of the council’s supposed ‘star performers’ are located.

Mayor James Collins is set to contest what could be the first of two elections in close succession - with the Dooradoyle businessman running alongside outgoing councillor Sean Lynch, and Abdul Kalam Azad Talukder, a city centre man who is bidding to be Limerick’s first Muslim councillor.

Mayor Collins is widely regarded as Fianna Fail’s great national hope for the future in the city, and he will be Willie O’Dea’s running mate at the general election, whenever that may be.

He is unlikely to face the curse of many a former mayor in losing their seat at the next election.

Across the civil war divide, metropolitan mayor Cllr Daniel Butler is for many within patry circles seen as being Dail material, despite the fact he pulled out of the general election selection convention in 2017.

While Cllrs Collins and Butler will battle it out for the spoils in Raheen and Dooradoyle, another interesting battle is developing in the village of Patrickswell.

To the anger of many in the Patrickswell branch, the LIT student sought the nomination from Young Fine Gael, and the party’s head office added him to the ticket apparently against the wishes of much of the grass roots.

With the pair living just doors apart in the village, it will interesting to see who comes out on top - with fears the vote could split.

Added into the equation is the presence of former detective garda, Cllr Lynch, who will be hoping the presence of his son, the All-Star hurler Cian on the canvass will give him a much needed boost as he bids to return to the local authority for a second term.

Maria Byrne’s large support base is likely to rally for Fine Gael’s South Circular Road councillor Elenora Hogan, who is untested at electoral level, having been co-opted upon her cousin’s elevation to Seanad Eireann.

She will face competition in this area from Labour councillor Joe Leddin, who will be hoping his uninterrupted run of 20 years in local politics will continue.

Despite being a self-confessed ‘reluctant politician’, Malachy McCreesh is running once more for Sinn Fein.

Meanwhile, there could be another split in the Social Democrat vote west of the city: while O’Connell Avenue woman Elisa O’Donovan is running for the group, Steamboat Quay businessman Mark Carey is contesting the election as an Independent.

This, after he missed out on a nomination from the fledgling party.

Mary Immaculate College lecturer Breandan MacGabhann, who has been vocal on the public transport issues in Limerick, is representing the Green Party, while former mayor Jim Long is throwing his hat into the ring as an Independent.

Two late entries to the race come in the form of former Crescent College student Jamie Morrissey, Cathal McCarthy, Weston Gardens, and Nigerian businessman Sunny Goodwin Odajradau, who has one of the best reasons for seeking public office - “to give something back to the city that has welcomed him”.