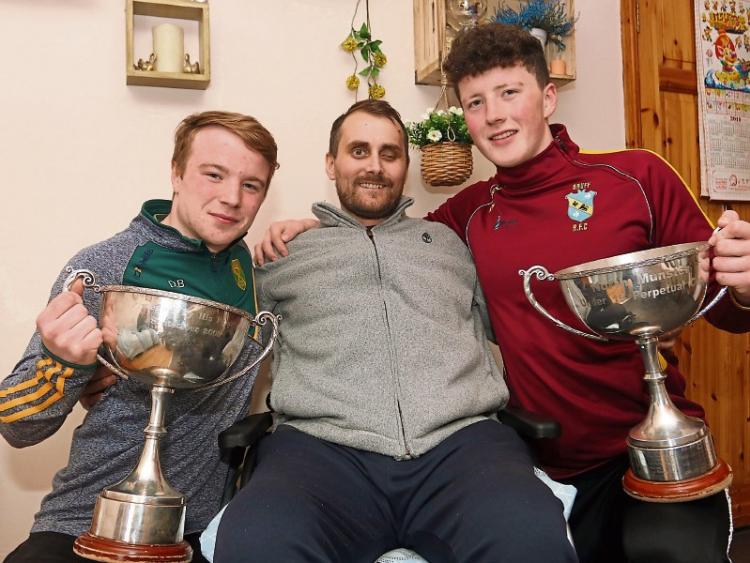 A COUNTY Limerick man who was given the last rites by a priest after a horrific motorbike crash has made a miraculous recovery.

A doctor in University Hospital Limerick told Barry Heffernan’s family that while his heart was beating he “wouldn’t last the night”. Barry was flown by air ambulance after the accident involving a tractor towing a slurry tank on the Kilmallock to Charleville road at the end of March.

The 30-year-old man’s heart stopped three times, he had three bleeds to his brain and was in an induced coma for nine days. Barry’s pelvis was broken, hip displaced, face badly injured and fractures of his collar bone, neck, spine, ribs, ankle, wrist, and right femur.

Amazingly the Caherconlish man is out of hospital and recuperating at home in Kilmallock with his partner Jade and their seven-month-old son Ódhran.

Barry coaches the forwards in Bruff Rugby Club’s U-18 team. After they heard about the crash Darragh Browne, captain, from Bulgaden and Brendan Gleeson, Kilteely, decided they would win the North Munster Cup for Barry and bring it to his bedside. The whole team and club rowed in behind them.

After they defeated Newcastle West in the final, Darragh gave a rousing speech on the field, saying: “Our coach Barry is up in hospital recovering from a crash. Without him we wouldn’t be here today. That was for him out there today.”

Darragh and Brendan planned to bring the cup up to Tallaght Hospital but then Barry was moved down to UHL. When they were bringing it into Dooradoyle Barry was already in Kilmallock so they brought it to his home.

“When I was up in Tallaght Hospital one of my friends texted me and told me they won a trophy on my behalf,” Barry told the Limerick Leader.

“When I heard that I cried a little because you spend so much time working with them. For me to recover from such an accident in such a fashion and to hear that these guys are willing to do that for me at their age is fantastic,” he continued. Barry said his surgeon is writing about him as he can’t understand his recovery. He was told he would lose five or six years of memory but Barry can remember everything.

After the accident, he says he managed to stand up and hobble away.

Nice touch from our captain with a special mention for coach Barry Heffernan who’s recovering in hospital pic.twitter.com/FY7dSpL8iG

“I met the driver behind me and told him to ring an ambulance before I passed out. I woke up a couple of times after the Air Corps flew me to UHL. My heart had stopped three times. Luckily enough it did because it gave my body a chance to reboot and get back to itself. They got me back going perfectly fine. I had three bleeds to the brain. They got me up to Beaumont, put me into a coma for nine days. I was hooked up to about 20 or 30 machines.

“After the first day all the bleeding stopped and healed itself up. My skull started going down to a normal size. My fingers and toes started moving and I woke up a couple of days later looking for Jade and my son,” said Barry.

As there is a screw going from the plate inserted to his pelvis and into his right hip he can’t put weight on his right leg for six or seven weeks to allow everything to heal up.

If the rehab continues to go well Barry hopes to make a full recovery in a year’s time and be back coaching the likes of Darragh and Brendan again.

Barry thanked his partner Jade who has been “amazing” throughout the whole ordeal as well as looking after their seven-month-old son Ódhran. He said his parents, Anne and Bernard Heffernan and sisters - Laura, Anne, Clare - were “fantastic”.

“They spent nights with me. I can’t thank them for what they did. They called everyday. They didn’t leave my side,” said Barry, who also wished to thank all the doctors and nurses in UHL, Tallaght, Beaumont hospitals who cared for him, and all in Bruff Rugby Club for all their help and support.