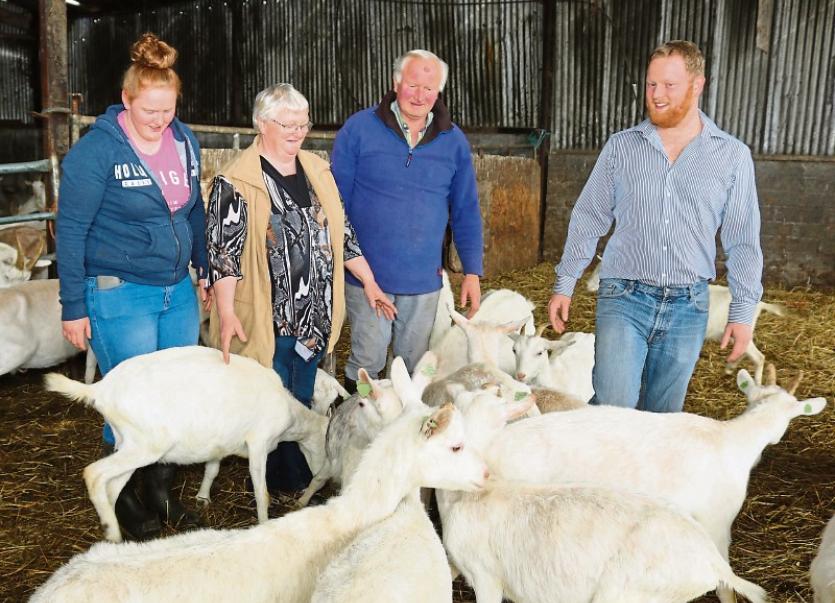 Norma, Breda, Jim and Seamus Leahy at Ballyquirke, Newcastle West, with their goats

A FARM family in Newcastle West is doing its bit to put West Limerick on the foodie map. Earlier this year, the Leahys, Jim and Breda with their son Seamus and daughter Norma, began producing their very own goat’s cheese which they have called Bally, after their home at Ballyquirke about two kilometres from Newcastle West.

Now, they are one of 45 finalists hoping to get one of just six year-long contracts with Aldi.

Meanwhile, however, they are busy supplying some of the top hotels and restaurants in Kerry  with their product, and of course, looking after their herd of 250 or so goats.

It’s all been a bit of a whirldwind experience for the family, and especially for Breda who has taken on the role of chief cheese maker.

Up to recently, Seamus explains, the farm was focused on producing beef cattle and sheep but always kept a few goats for feeding lambs. But in order to secure the future viability of the farm, they felt they needed to do something different.

In 2016, they began building up their goat herd, supplying the milk to Cordal Goat’s Cheese in North Kerry. Then last Autumn, came the opportunity to acquire the business as the owner, Shane O’Leary was looking to sell.

“We knew there was a market there and we saw how well he was doing,” Seamus said.

They made the leap and Shane trained them all in to the business.

But it is Breda who plays the chief role in making the cheese, which is a soft cheese. “I love it. I never made cheese before but I love doing it,” Breda says. “It is a three day process.” Each step requires care and vigilance to get it just right. Currently, they are producing three flavours: original, honey and chilli, and garlic and thyme. But in future, they intend to experiment further and introduce  new flavours. They also have ambitions to produce a semi-soft cheese with a rind, as well as a hard cheese, somewhere down the line.

The chance to get into every Aldi supermarket in the country is focusing their minds at the moment. It has come as a bonus, and a huge boost at this fledgeling stage of the company.

Entering the competition, the Leahys figured, was a long shot as some 170 different producers and artisan producers around the country answered the call. “There was a Dragon’s Den kind of presentation we had to do,” Seamus explains.

They are now in the last 45, all of whom will see their produce being marketed, displayed and sold in Aldi stores around the country on June 6. The six who will get year-long contracts with the company will be announced at the Ploughing Championships.

Meanwhile, the work of milking 100 goats twice a day and bringing the milk to the production unit outside Castleisland continues,  along with the care of over 130 kid goats at various stages.

In the long term, says Jim, the family hopes to build its own processing unit on the farm and bring Bally home to Ballyquirke.