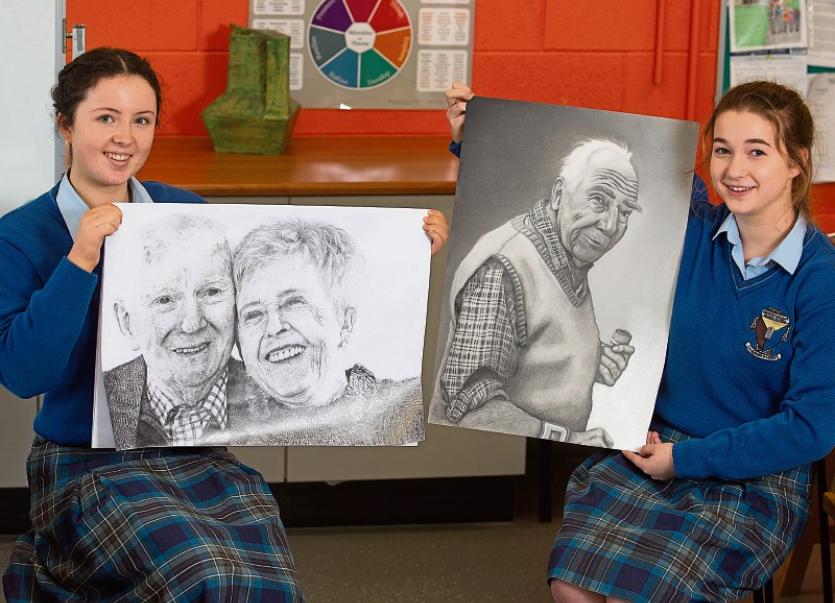 Sadhbh O'Connor, left, and Emily Murphy with their prize-winning entries

TWO students at Abbeyfeale’s Coláiste Ide agus Iosef have had their artistic talent recognised at the 68th annual Texaco Art Competition. Emily Murphy and Sadhbh O’Connor, both of whom are fifth year students at the school, won Special Merit awards for their portraits in their age group category.

This year’s overall winner, Naoise Hennessy from Co Wexford, came from the same 16-18 age group and took first place in their category.

Their achievement, according to their art teacher, Keith O’Rahilly, is all the more laudable given that there were some 25,000 entries in total this year. “These young women are exceptionally talented,” he said. “I couldn’t be prouder of them. They did a  lot of this outside school hours and a lot is down to themselves.”

“I was delighted,” said Sadhbh O’Connor who submitted a charcoal drawing of her grandparents, Jim and Noranne Dennison which she titled “Cherish the Years”. “You don’t know and you could get nowhere. I was absolutely delighted that we both got Special Merits.”

For the 16-18 category, Sadhbh explained, you could pick any subject. But she chose a portrait of her grandparents, to whom she is very close. “I really wanted to draw them because it was their 50th wedding anniversary last year. My Nan is great at art herself and always encourages me and so does my granddad.”

Emily Murphy merit-winning entry was also a portrait in charcoal and mixed media,  of her uncle Peter Roberts. She titled it Chief because that was how Peter was affectionately known within the family. A Co Mayo man, he was a fisherman all his life and was 93 when Emily drew his portrait.

The award ceremony to which the two girls will be invited is due to take place next month.