Posters up in Limerick as election slides into view 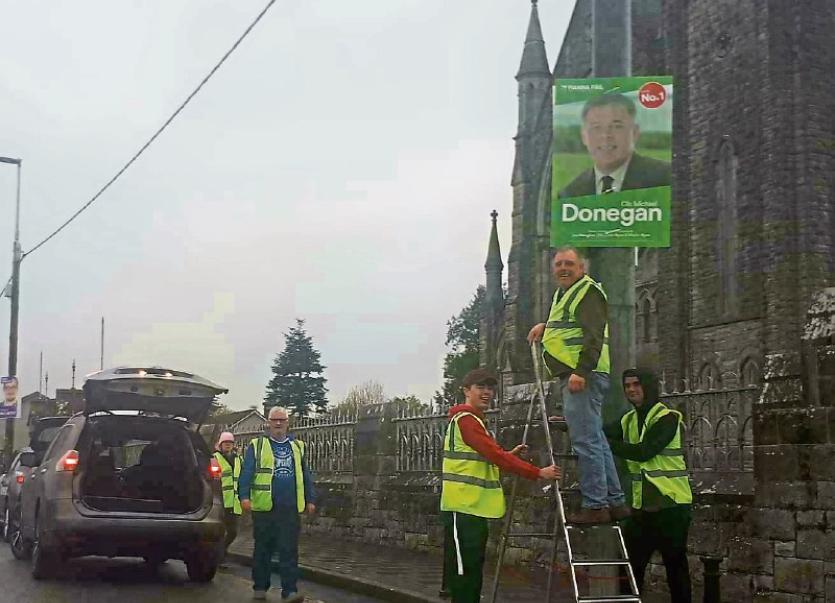 Cllr Mike Donegan and his team at work on Wednesday morning

THE final countdown to the local and European elections got under way in earnest this Wednesday as candidates’ posters started covering the lamp posts across Limerick.

Under environmental legislation, hopefuls for the local councils and European hopefuls are allowed to erect posters on lamp-posts and other public spots up to 30 days before polling day which is May 24.

However, it appears some candidates have been trying to gain an early advantage, putting their posters up on Tuesday night, hours before they were allowed at midnight.​

Sinn Fein councillor John Costelloe has criticised those who have done this – and reported them to council bosses with photographic evidence.

Any candidate who is found to have put posters up early could face a €150 littering fine if they are found to have breached the guideline.​

“We all want to start on a level playing field,” Cllr Costelloe told the Limerick Leader, “Midnight is midnight, not 7.30 in the evening. There are certain parties who did not want posters up and they are the very ones who had posters up. It feels like they are giving people the two fingers.”

He added: “They are the very ones, if Sinn Fein put their posters up early, would be giving out. We would be hauled over the coals if we put them up early. It's very unfair on people who chose to wait until 12.00 or five past 12 to then proceed to do their postering. It's not just the rule breach too, they gain all the good spots and vantage points.”

Cllr Costelloe also criticised some candidates who advertised public meetings on their posters - thereby being able to circumvent the rules somewhat and get their headshots out earlier than this Wednesday.