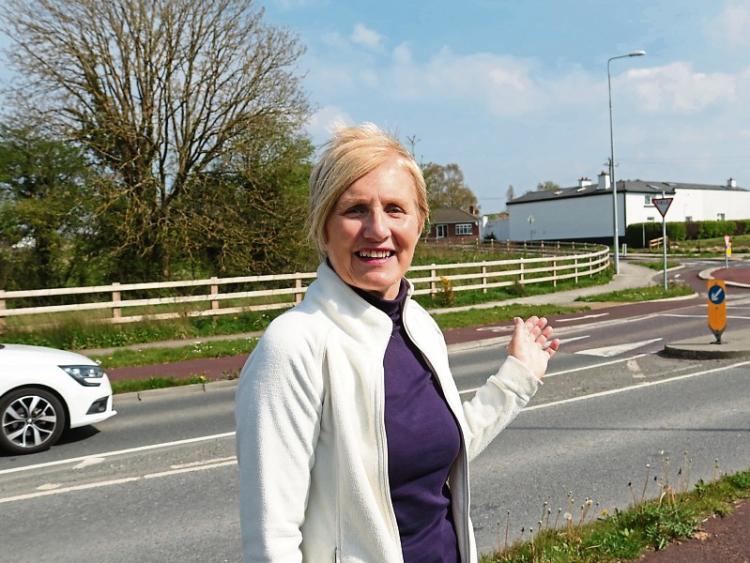 Cllr Marian Hurley pointing towards the site of the proposed development, the density of which is causing alarm in Annacotty

A HOUSING plan which will proposes to build over 100 units in two seven storey blocks off the Annacotty roundabout has been criticised by local councillor Marian Hurley.

Cllr Hurley, whose father Jack Scanlan farmed land in the area, said she would stand “100%” with residents in opposition to the project.

Under multi-million euro plans, the homes are to be constructed in two blocks over seven storeys.

Since more than 100 homes are planned for the site, ​it will skip the local authority planning stages and go straight to An Bord Pleanala under new legislation designed to tackle the housing crisis.

The Fine Gael councillor, who also lives nearby, acknowledges the need for more homes, but feels two blocks of seven storeys is just too high – and she has noise concerns.

“Naturally employees of the National Technology Park will be seeking accommodation adjacent to their respective workplaces but local residents are extremely concerned at the density that is being sought by the developer of this particular site,” Cllr Hurley said.

“Two seven storey apartment blocks are being mooted in this already elevated site which I find beyond comprehension in a well established residential area,” she added.

“While high density is being sought at this location also, the development would be overlooking the Plassey river – a totally different scenario,” she said.

“Once the site notices goes up in the coming weeks )for Annacotty) I expect that there will be a high level of objections to such a development from local residents and I will be 100% behind them on this.”

Cllr Hurley also questioned whether the road network, as it stands would support the new apartments – as well as whether there are enough school places locally.

Once the consultation stage is over, a developer will then be able to apply to An Bord Pleanala for permission.

While Limerick Council is out of the loop in this application, it can still object to or support the plans – as can members of the public.

Another fast-track housing development is being sought opposite the former Punch’s Cross hotel.

A student/residential development could see over 300 beds delivered at the former John Moloney garage. An Bord Pleanala has been contacted for comment.