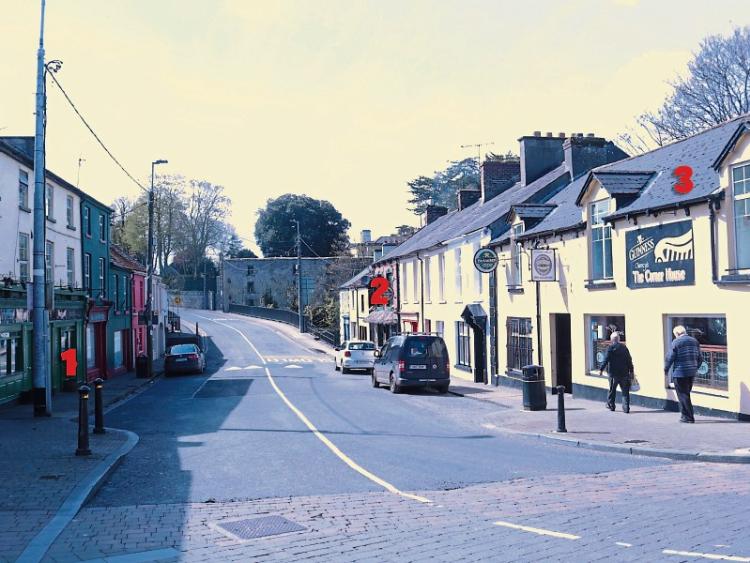 Hickey's bar (1), The Old Mill (2) and the Corner House (3) have been ordered to shut for two days after selling alcohol to a minor

LENT may be coming to an end this weekend but drinkers in one Limerick village are facing the prospect of having to go on the dry for two days in the middle of next month.

Three of the four pubs in Croom have been ordered to close on Monday, May 13 and Tuesday, May 14 after the licence holders were convicted, at Newcastle West Court, of selling alcohol to a girl who was under 18.

The proprietors of Hickey’s Bar, The Corner House and The Old Mill were each prosecuted following a covert garda operation on September 20, 2018.

Having dealt with the three cases, Judge John King commented that the people of the village “will have to go the off-licence” on the two days the pubs are closed.

In the case of Olivia Kiely, Inspector Andrew Lacey said a test purchaser, who was aged under 18, entered the Old Mill at High Street at around 7pm and bought two bottles of cider.

Solicitor Michael O’Donnell said the test purchaser was “very mature looking” and appeared to be “well over the age of 18”.

He confirmed the licencee was not present on the night and that the staff member who served the teenager was reprimanded and has since undergone training.

In the case of James Hickey, Judge John King was told the same girl entered Hickey’s Bar, which is located across the road, and bought two cans of Bulmers.

Insp Lacey said the girl, who was accompanied by a plain clothes garda, was not asked for ID by the person who served her the alcohol.

Solicitor John Lynch said his client was attending the National Ploughing Championships on the day and that the staff member who was working felt she was over 18.

He said the premises is an “old man’s pub” and that there is signage in the bar advising customers that those under 18 will be asked for ID.

He confirmed his client has organised training since.

In the case of Brid Tangney, the court heard the same test purchaser bought two bottles of Bulmers cider at The Corner House bar at around 6.45pm.

Mr O’Donnell said the pub is a family-run business and that the part-time employee who was served the young girl is no longer working there.

In each case Judge King imposed a €200 fine giving each of the publicans three months to pay.

He told them he had no choice but to impose a two day closure order.

When asked by the judge, Insp Lacey said the test purchaser was from the general area and was attached to a local club.

He said he did not have further details or a photograph of how she looked or was dressed when she entered the three pubs.