Taoiseach takes a walk on the greenside of Limerick life 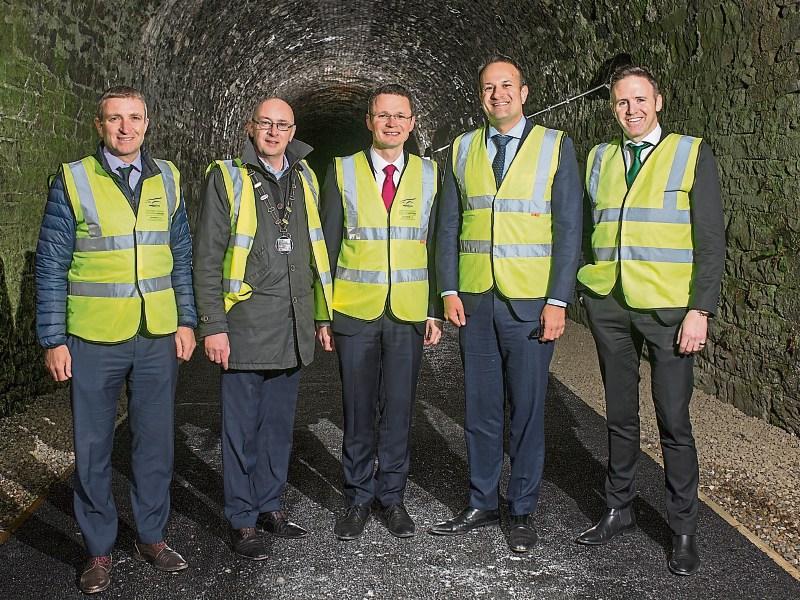 AS part of the Taosieach’s busy itinerary in the Midwest, Leo Varadkar made a number of stops in west Limerick.

Included in this were a visit at Aughinish and the Great Southern Greenway.

Alongside him at both of these stops was Minister of State Patrick O’Donovan.

Minister O’Donovan’s goal was to outline the potential The Great Southern Greenway has to be Ireland’s first cross country greenway linking Lough Derg to the Kerry coast.

The Minister of State at the Department of Finance and the Department of Public Expenditure and Reform believes that the route along the old railway line not only provides a fantastic facility for local people and visitors, but also proves to be a growth for tourism in rural Limerick.

“There is huge potential for the Great Southern Greenway to become one of the leading greenways in Ireland and one of the greatest contributors to tourism and the economy in county Limerick,” Minister O’Donovan said.

“We have seen the success of the  Great Western Greenway in Mayo and the Waterford Greenway, with the latter opening up the towns and villages along its route to new customers and visitors every week. It has also made a huge difference to the town of Dungarven and city of Waterford,” he added.

Minister O’Donovan believes that the Great Southern Greenway can match and perhaps even surpass the popularity of these Greenways with time. He also explained why the Taosieach made the decision to visit the Aughinish alumina plant.

“The Taosieach really lead the government's response to the potential job losses at Aughinish. So he wanted to go down there and meet the management and staff face to face. He wanted to see the plant first hand,” Minister O’Donovan said.

“Both the management and staff were very receptive to his visit,” he added.