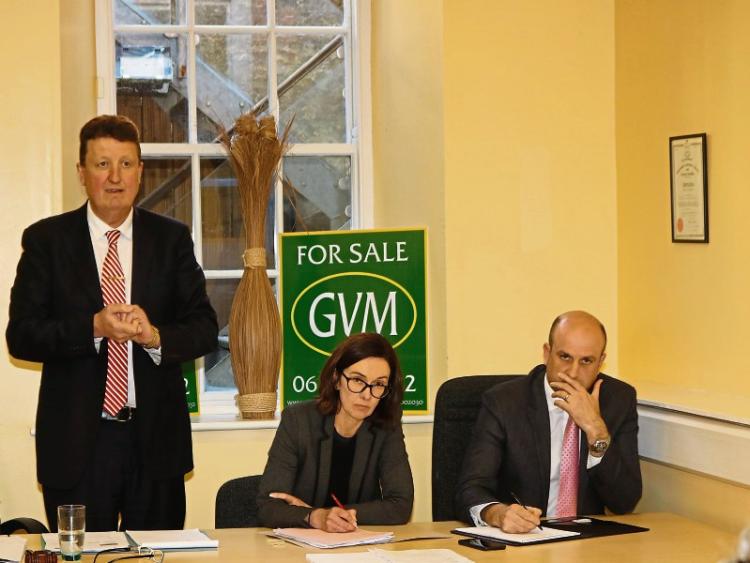 Interest was so keen that people were in 20 minutes before the auction was due to commence.

“As land goes ‘tis a lovely bit of land,” one was overheard to say. One attendee asked another, “Where are you from yourself?” Killaloe was the reply.

“You’ve lovely views but you’ve come to Limerick for the good land!” he said.

As the clock struck 3pm, GVM’s Tom Crosse and John O’Connell accompanied by Valerie Noonan, solicitor, strode in. Over 50 were waiting. The gentleman sitting alone in the front row looked like he meant business.

Mr Crosse was like a ring announcer telling the boxers he wanted a good clean fight.

“It is a really top class holding on the Main Road, 1.5kms from Adare. It is a fantastic piece of rolling parkland - very well laid out in four smashing fields. There is a two storey residence that was occupied until a few years ago.

“It is in close proximity to the fantastic picturesque village of Adare. It is like buying a good share, when you buy in the right location not often does it lose its value. A property like this only comes to the market once in a lifetime,” said Mr Crosse.

No bell was rung but it was time to do battle.

There were four bidders - two farmers, a businessman/farmer and a solicitor representing a client. He was the man in the front row.

Seconds out, round two. When they returned, Mr Crosse said they hadn’t reached their reserve. Battle recommenced.

At around €750,000 the two farmers were knocked out. It was down to the solicitor in the front and the farmer/businessman at the back of the room. The tension and excitement in the room increased as the price went higher and higher. The two men traded blows up to €930,000.

A second recess was called. Afterwards, Mr Crosse announced: “We’re on the market to sell.”

“This is one of the finest pieces of land I’ve had the pleasure of offering for sale for many a long day. We’ve spoken about the excellent quality of land, the importance of the house, location, location, location - this property ticks all the boxes,” said Mr Crosse.

Round three. The two weren’t getting punch drunk. At €950,000, the solicitor had his opponent on the ropes.

An encouraging Mr Crosse said: “Don’t leave it after you. You will be admiring it for the rest of your life. You can’t buy gold too dear. It’s a peach.”

The auctioneer nearly had this reporter, who hasn’t a brass farthing to his name, putting his hand up!

The farmer/businessman fought on. He went €955k. The lawyer responded as casually as if he was ordering a coffee from a waiter after a sumptuous meal - €960k. €965k from the man at the back.

The solicitor delivered the final blow with a bid of €970,000. Mr Crosse ended the fight with a loud thud of his gavel.

“Thank you all on behalf of the vendors - Anne And Patricia Sparling - to all the bidders, the purchaser and thank you all for attending.

“Hopefully it is a great indication for land prices in County Limerick for the year ahead,” said Mr Crosse.

The rumour after the auction was that the buyer is an Adare-based businessman.

Mr Crosse remained tight-lipped but would say it was a “record price” for agricultural land in County Limerick. He did sell 27 acres in Adare over Christmas for €38,000 an acre but that price was skewed by some of it being zoned development land.

GVM have another similar sized holding in Adare coming to the market in the coming weeks.

Could there be a rematch?