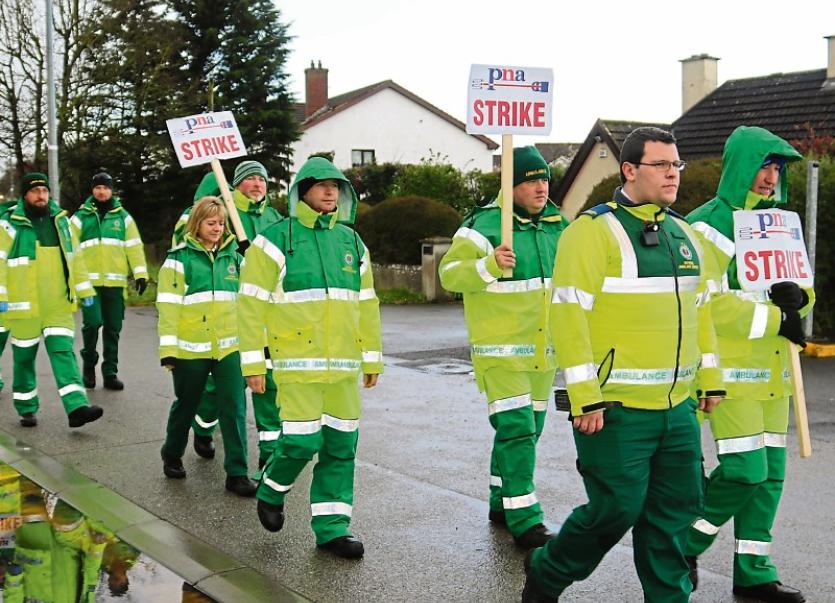 MEMBERS of the National Ambulance Service in Limerick have returned to the picket lines for a fifth time over an ongoing dispute over union recognition.

The National Ambulance Service Representatives Association (Nasra), a branch of the Psychiatric Nurses Association (PNA), have staged their fifth strike so far this year this Tuesday, from 7am to 5pm.

This follows a protest outside Dail Eireann last Wednesday, which included a number of Mid-West members.

A spokesperson for the Mid-West Nadra branch told the Leader: “The support from the public and our supporting TDs, senators and councillors has been truly remarkable. It is clear that the will of the public and our supporters is to see our National Ambulance Service staff represented by their union of choice. Limerick staff are standing strong with their heads held high. We are as resolute as ever and we will see this through.”

On a previous day of picketing on February 28, branch secretary Liam Moore said: “It’s not backgrounds we are going; it’s forwards. There is some forward momentum at the moment.”

Nasra member Derek O’Brien and his union colleagues have consistently made assurances to the public that all emergency cases are being covered by the crew at the St Nessan’s Road base.

There are around 30 members of the Mid-West branch, out of a total of some-600 nationally, comprising paramedics, control room staff, dispatchers, and emergency medical technicians.