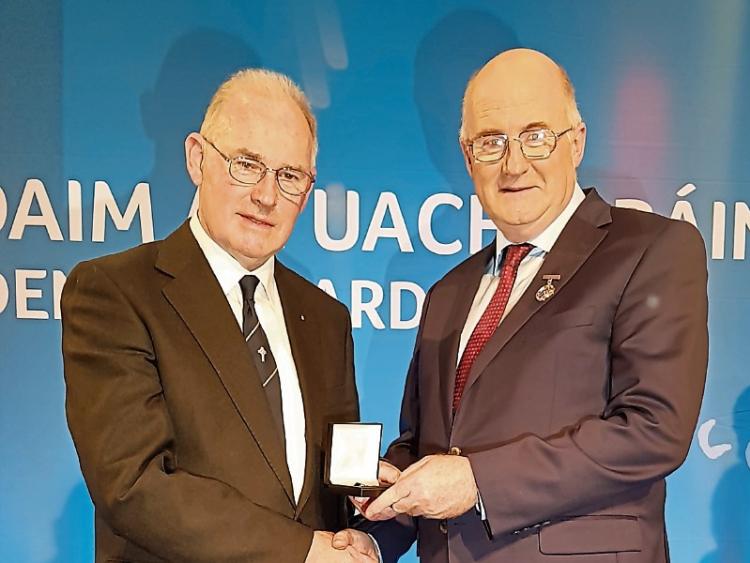 THE INDELIBLE impression left by Br James Dormer on his pupils and the places where he has taught has been recognised by the GAA.

At a televised ceremony on Friday night, the Christian Brother received the prestigious GAA President’s Award for education. It was for his contribution to the promotion of Gaelic Games in primary schools over a period of almost 50 years, Every one of his pupils in Wexford, Carlow, Sexton Street, Lismore and Doon learned to play hurling. Of his 46 years in the classroom, 23 were spent in Doon CBS Primary School. All-Ireland winners Pat Ryan, Barry Murphy, Darragh O’Donovan and Richie English passed through his hands either in school or with Doon GAA Club.

Indeed, Barry said Br Dormer was the “biggest influence” on his career. Barry’s mother and father, Patricia and Colm Murphy were two of his 22 guests at the event in Croke Park. They were part of a big contingent from Doon GAA club and County Limerick to travel to the capital.

Br Dormer, who is from Dublin, said the President’s Award was a lovely honour to receive.

“I was delighted to share it with my family, friends, fellow Christian Brothers and members of Doon GAA Club,” said Br Dormer, who is the last Christian Brother to be a primary school principal in the country.

John Horan, president, said the GAA is many things but “ultimately it is always about people because it is people who are the unselfish volunteering rock upon which our association is built”.

“This important event affords us an opportunity to recognise some extraordinarily special people who have given lifetimes of service to their communities and to the GAA. They represent the high standard and high calibre of people who we have been blessed to have at our core and are an inspiration,” said Mr Horan.

Tributes poured in for Br Dormer. Current Doon GAA goalkeeper and teacher, Cathal McNamara shared this anecdote on Twitter. “When I started in second class my mother asked what books did I need. Br Dormer replies: ‘A hurley and helmet and he’ll be OK.’ The impact this man had on underage hurling in Doon and Limerick will never be matched. Congrats Brother.”

Teacher and former Tipperary hurler, Shane McGrath said: “Brother Dormer will be a name synonymous with the GAA forever. He helped shape clubs and players to what they are today. A gentleman. A true Gael. Can only imagine the respect he holds in the places where he made the difference. Well deserved.”