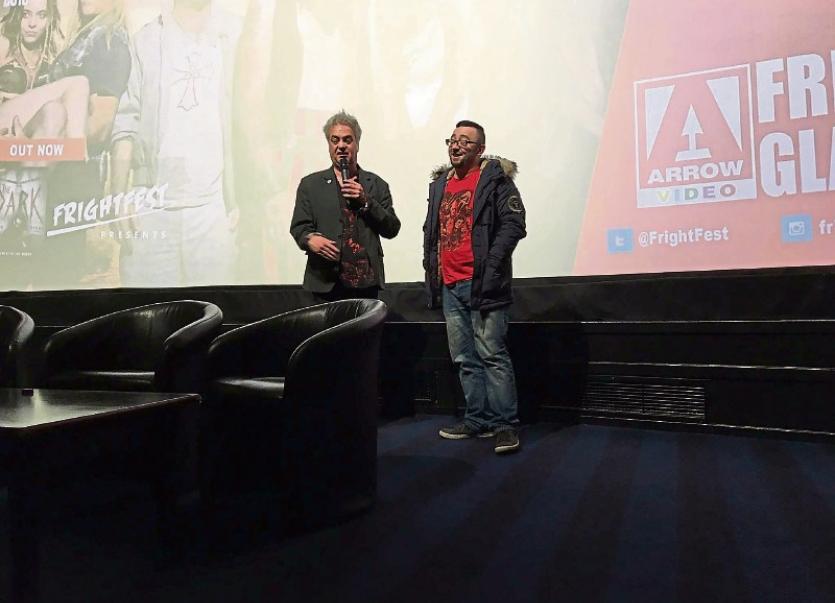 Paddy Murphy, right, director of the Perished, pictured on stage with Paul Mcevoy, co-founder and programmer of Frightfest, at the premiere

A film shot in Limerick and west Clare has been making waves in horror movie circles in the UK, after exciting a lot of interest at a film festival in Glasgow.

Directed by Limerick native Paddy Murphy, the horror film was shot in Limerick and West Clare.

Now it is set to reach wider audiences after Paddy got the trailer screened at Frightfest.

Yet he insisted this is only the beginning: “It went down really well, we received some really nice comments and also some great tips from some very knowledgeable people,” he told The Leader.

He’s not resting on his laurels however, saying “There’s already people asking if it’s being shown in London (Frightfest festival) in August, I don’t know that, but that’s what we’re aiming for.”

Canada is next up, where the trailer is being screened next month.  Just across the border from there a lot of the heavy lifting of post-production is being done. The full version has been sent to a major film company in the US before final editing.

Paddy describes the film as “different to a typical horror, it’s not very violent, not too bloody, but very mature and emotionally heavy. It portrays some important messages in a subtle way.”

The emotional side is portrayed excellently by lead actress, Limerick’s own Courtney McKeon. “They say you should never write with an actress in mind, but I knew from the moment I pitched the idea, that Courtney would be perfect for the role,” said Paddy.

The two have a long running professional relationship, dating back four years to when Paddy first spotted Courtney’s acting and acknowledged she had “something different”.

A number of locations throughout Limerick were used for filming, which ran from October all the way through December.

Amber nightclub was used to film the opening scene, Paddy had nothing but praise for the staff there.

“Everyone we approached was so nice.  Amber was the ideal location for such an important scene, it was phonemonal.”

He was also sure to praise the old fire station, which was also used for two  separate scenes

Shooting in the local area and using local actors is crucial to Paddy, who believes there’s much to be gained from the setting of Limerick and the “limitless” talent out there.