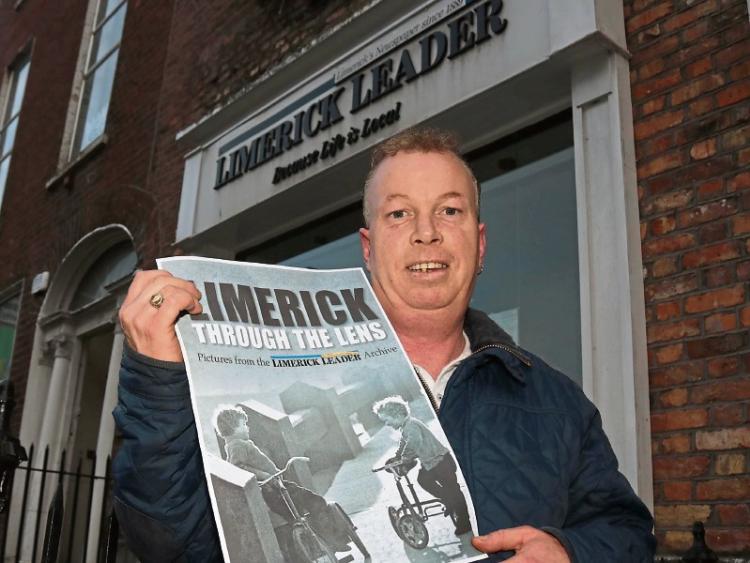 Patrick McCarthy was shocked to find himself on the cover of Limerick Through the Lens | PICTURE: Michael Cowhey

PATRICK McCarthy got a glimpse into his Limerick past when he came across a childhood photo of himself in the most unlikely of places, the cover of a book.

Mr McCarthy who was born in Limerick but moved to Kerry as child came across a photo of himself, which was taken 40 years ago, on the cover of Limerick Through The Lens: Pictures from the Limerick Leader Archive.

He had no idea of the photo’s existence until his cousin, Connie Faulkner, informed him off it.

“I was passing the Limerick Leader one day and he seen it through the window. So I just told him, I seen your photo today, it’s in the big Limerick book  from the 70’s. My brother, his uncle is there,” said Connie, who still lives in Limerick.

“I came down to visit my uncle and he told me the book was for sale in the shops around town. We went around and tried to find it, but the shops were all sold out,” added Patrick.

Patrick said it was strange to see a moment of his childhood on display, but is glad the moment was captured as he dosen’t have many photos from that time period.

“It brings back memories, a photo like that. I was only a couple of years old, exactly what age I was I couldn’t tell you.

“The person who took this photo probably took a lot of photos all across the world of all sorts of people. I just never thought I’d see a photo like that of me,” said Patrick.

“I’m living in Kerry now but we were living in Limerick at the time. We moved from Limerick back to Kerry. We moved to Tralee with my father many a year ago. I found out about the book (Limerick Through the Lens) recently, but I could not find the person who took the photo,” he added.