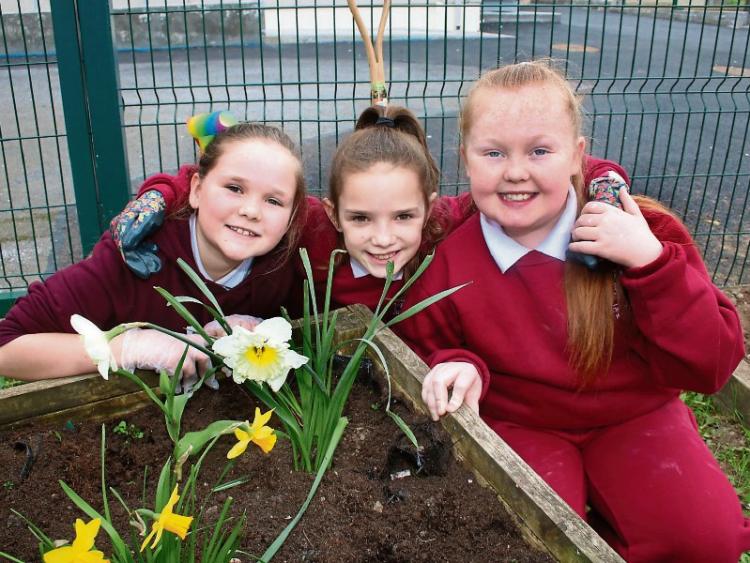 CORPUS Christi national school kids are getting their fingers green, as part of their mission to restore Moyross’ community garden while raising awareness of climate change.

The community garden, which was once blooming with a variety of fruits, veg and flowers, fell into disrepair during the construction of the expanded community centre.

And though the old rockery is slightly overgrown and the barely a gooseberry leaf has sprouted, all this community space needs is a tidying-up and the turning of the fertile beds.

“We are trying to encourage planting your own vegetables and fruit at home as opposed to buying them in a store, and we are looking at the wider picture of how that will affect climate change down the line. We also want to foster a love of gardening in the community.

“All the parents have come down, they have been a great help. We have a school garden as well in the school. Some of the kids would have done a small bit of gardening before, and the exposure to owning their own garden is great for them,” Mr Kelly said.

Teacher Helen Cleary said: “We are going to be utilising this space to get more of the community involved. We started the school garden last year, but now we want to expand it. This was a very vibrant garden. With all the building that has gone, it has fallen into disrepair, so we want to get it up and running again.”

Noelle Fitzgerald, whose father had previously worked on the garden, was with her son Joshua who was working on the sod. “It’s a good day out here in Moyross and it is brilliant for the kids to learn all that creativity.”