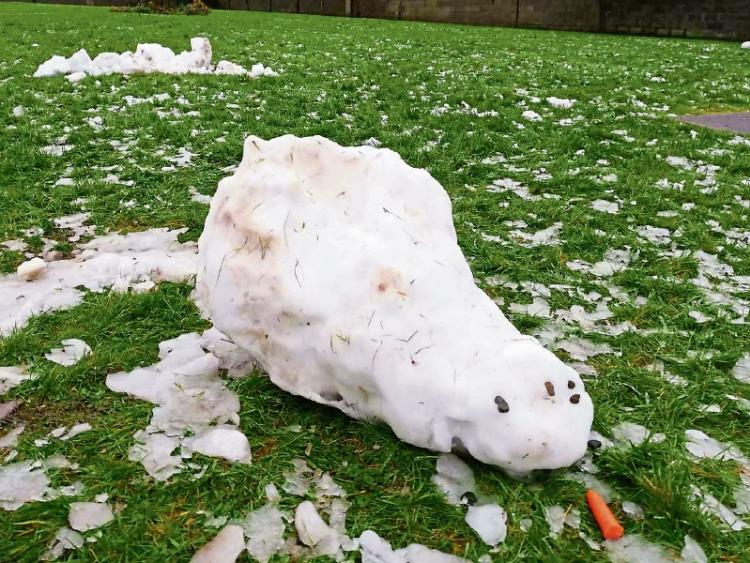 THE thaw has set in following a thick fall of snow over parts of Limerick.

Residents in the south and east of the county got a gentle reminder of the Beast from the East with heavy snowfall from around lunchtime on Sunday.

Snow lodged in many places with elevated Kilfinane and the surrounding areas being worst affected. However, snowmen were barely built before they started melting again.

Motorists heeded warnings of possible dangerous conditions and either stayed at home or drove very carefully as Bruff gardai reported a quiet Sunday on the roads.

The few weeks of early Spring bliss for farmers ended as cattle were brought back into sheds. But the recent dry spell has been of huge benefit for those with diminishing fodder reserves.

In Croom and Adare, conditions were described as “not too bad” this Monday morning.

The city escaped the worst, with the snow not sticking in most areas.

AA Roadwatch are warning that some roads remain affected by icy or slushy conditions.

There was plenty of disruption, with motorists feeling the brunt of it, including those travelling to other areas. Limerick hockey star Roisin Upton said on Twitter that it took her seven hours to get to Dublin.

The Clare and Limerick Allianz Hurling League clash in Cusack Park in Ennis was played out in almost constant snow in the first half and bitter conditions overall.

And the the Limerick Forestry Rally was cancelled due to the snow, Metro Mayor Daniel Butler reported.

This is the Limerick Forestry Rally now cancelled due to safe concerns with the snow! pic.twitter.com/ojVrjD9y7Z

The N21 on the Limerick-Kerry border was badly affected by the snow conditions, while West Limerick saw a heavy fall of snow.

Cold with snow lying in places at first today. Showers mainly of rain and hail today but turning to longer spells of rain at times, some heavy with the risk of thunder. Any sleet or snow showers mainly restricted to high ground. Highest temperatures of 4 to 8 degrees Celsius. pic.twitter.com/JystC2mY6O