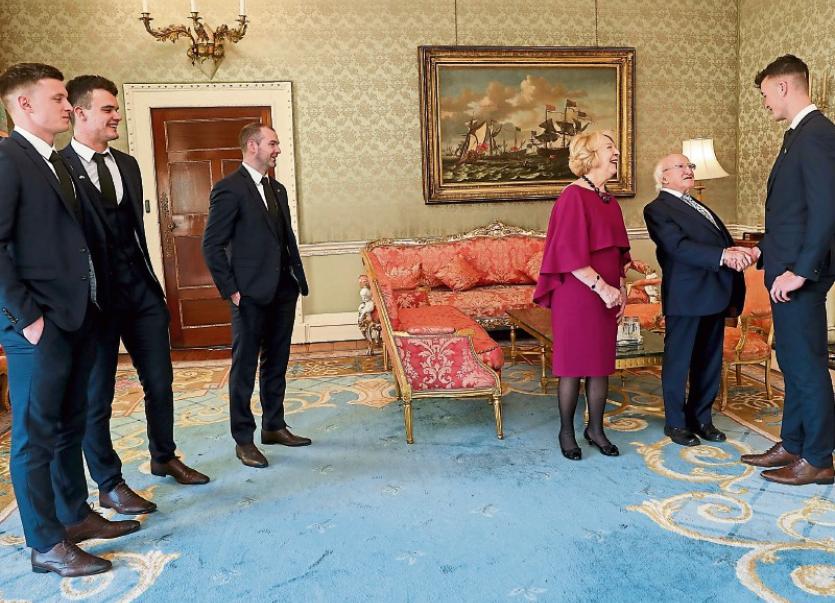 IN THE midst of the presidential election last September, Limerick auctioneer Pat Kearney told John Kiely he should run for president.

He certainly would have topped the poll in County Limerick!

John, his management team, Limerick hurlers, family and friends, and members of the county board were welcomed by President Michael D Higgins and Sabina to Áras an Uachtaráin on Tuesday.

President Higgins, who had a foot in both camps on All-Ireland final day as he was born in Limerick city but is best known as a Galway man, described the hurlers as “role models”.

“The excitement and enjoyment of Limerick’s win stretched far beyond the borders of that county, enthralling hurling enthusiasts up and down the country. It has also ensured that you have become inspiring role models for a new generation of young hurlers and thus you are playing a significant role in encouraging the participation of young people in sports,” said President Higgins.

He said the rapturous homecoming reception in Limerick, where tens of thousands of people lined the streets to welcome them home, was “a joyous occasion that brought a spirit of celebration to the county that lasted for many weeks.”

“Your achievement is one of which you can all be very proud. It is, of course, not an achievement that came lightly or easily. The road to great sporting success is always a challenging and often a difficult one. It is not a journey for the fainthearted. Those who seek accolades are required to put in the hard work, and to persevere through the setbacks and difficulties that so often stand between us and our goals,” he stated.

“Success is earned and those who have closely followed your journey to victory will have seen the sacrifices you have made and the relentless commitment you have always given to be the best you possibly can.

“Equally impressive to witness is the special bond of friendship and the inspirational teamwork that I know has carried you through testing games and through training sessions on long cold winter nights,” said President Higgins.