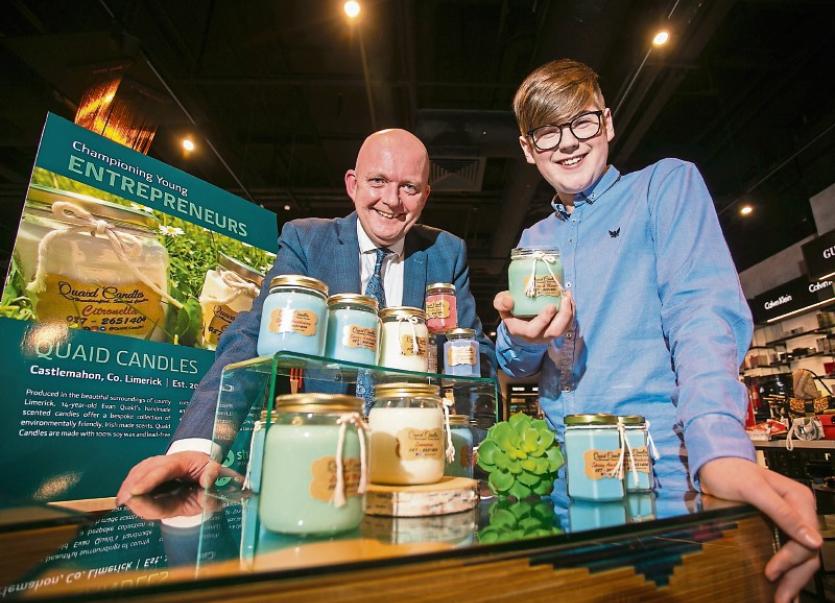 A TEENAGE entrepreneur from Limerick has become the youngest ever stockist at Shannon Duty Free.

14 year old Evan Quaid from Castlemahon in West Limerick has become the youngest ever producer of an item to be stocked at the world’s first Duty Free store after his Quaid Candles were put on sale there.

The young student has been rewarded for his remarkable entrepreneurship by having his product placed in the store.

Evan, who won the junior category of the National Student Enterprise Programme after developing the product in November 2017, messaged the Shannon Airport Instagram account late last year asking for the candles to be stocked in the store.

After meeting him and his mother Triona, the Duty Free team didn’t think twice. Head of Commercial at Shannon Airport Darren Smyth said that the airport was struck by his enthusiasm, entrepreneurship and the quality of the product.

“Evan is a remarkable young man and it’s already clear that he has a very bright future in business ahead of him. We were impressed by his enterprise in the first instance and then wowed by his enthusiasm and determination when we met him,” he said.

“He got the idea for the candle making business from his favourite YouTube vlogger, bought a candle making kit and it started from there. That’s the type of ‘can-do’ spirit that has epitomised Shannon over the years.

“We want him to be the first but not the last young entrepreneur to have their goods featured here and we would ask any others out there that are producing non-perishable items to see this as an opportunity for themselves.”

Evan said he was “delighted to get my candles into Shannon Duty Free”.

“I contacted a number of stores about stocking my candles and Shannon Duty Free came back very quickly, said they liked the idea and asked if they could meet my mother and I. I’ve read up about the history of Shannon Duty Free, that it was the first airport duty free shop in the world. With over 1.7 million passengers going through the airport each year, it’s a fantastic opportunity to have the candles stocked.

“The staff at Shannon have been really supportive and this is a really big moment for me. Aside from being a great place to have my candles on sale, this is great promotion for the candles also.”

Shannon Airport managing director Andrew Murphy said: “Shannon Duty Free has been a supporter of local businesses from its origin. In recent years we have put a significant focus on featuring local producers in the O’Regan Food Emporium and the Shannon Design section.

“We currently have 50 Irish suppliers with over 100 different products on sale in the store and now we have Quaid Candles sitting proudly among them.

“In addition to his entrepreneurship, Evan has shown great enthusiasm and courage. He’s been a pleasure to deal with and we are all in agreement here that not alone has he a really good product but we’re going to be hearing a lot from him in the years ahead.”

Shannon Duty Fee is asking that any young entrepreneurs between the ages of 13 and 18 years who would like to have a product considered for inclusion in the world famous Shannon Duty Free shop to email youngentrepreneur@shannonairport.ie for an application form.