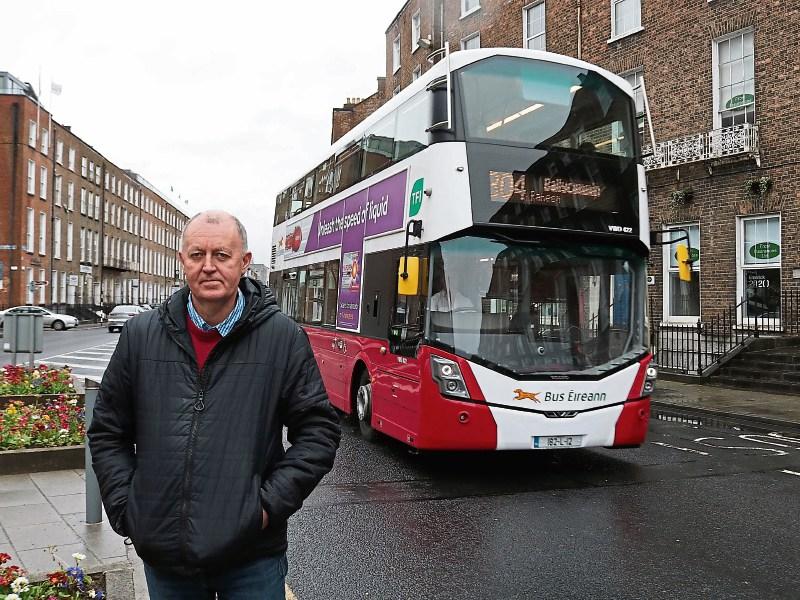 Tom Dowling across from his bus stop, The Crescent, O’Connell Avenue, where he gets the much-criticised 304 bus to Castletroy most mornings Picture: Michael Cowhey

AN INFURIATED commuter has said that the National Technology Park and surrounding area is “heading for certain gridlock” unless the National Transport Authority and Limerick City and County Council invest in public transport.

Tom Dowling, who lives in the city, boards either the 304 or 304A bus service every morning to go to work at the National Technology Park in Plassey, next to University of Limerick.

Tom moved from Dublin to Limerick in 2015 for a better quality of life, to be close to local amenities such as cafes, restaurants, shops, and to avoid using a car where possible.

But Tom, who works in a management role, is among the large cohort who are immensely dissatisfied with Limerick’s bus services.

He says he has two options; take the 304A or the 304. The former skirts around the city centre and reaches UL within 21 to 27 minutes. However, the 304 goes through the heart of the city and can take up to 45 minutes which, he says, “makes no sense for a 6km journey with most of the delay at William Street”.

If he cycles, which he does generally between May and October, the journey only takes him 18 minutes.

This analysis only scratches the surface of Tom’s efforts in highlighting his experiences, which he does frequently on Twitter.

And since he started using the service since 2017, he has found it to be “very unsatisfactory”.

“It feels like a town to town connection in rural Ireland, rather than a city service serving Ireland’s third largest city,” he says.

He often has regular lunchtime meetings with managers of all the businesses in the National Technology Park area, and the main issue to resurface frequently is traffic. And while he has seen “massive growth”, there is a concern that the road network “cannot cope with the planned expansion” of new projects in the area, he tells this newspaper.

“The area is heading for certain gridlock unless Limerick City and County Council and the National Transport Authority undertake to make a serious investment in public transport to and from the city centre, including building park and rides on the outskirts where workers can be bussed to and from.”

He says that another issue that Limerick faces is the habit of drivers parking in bus lanes.

“There is no point in installing signage indicating that parking is prohibited if it’s not going to be enforced. I have been verbally abused on several occasions for informing people they are parking on double yellow lines and bus stops. Why? Because they know no action will be taken.”

He says when gets off at Roches Street bus stop, it is full of cars “forcing the bus driver to let passengers out on the road”.

“On one occasion I witnessed a passenger almost suffering crush injuries as they passed between two cars parked in the bus stop and one was starting to reverse and then got verbally abused for banging on the car booth.”

He says a “cultural shift” needs to be instigated by Limerick City and County Council, so that motorists and public transport can coexist.

Tom’s account, alongside the Limerick Leader survey, was sent to Limerick City and County Council and Bus Eireann on Monday.