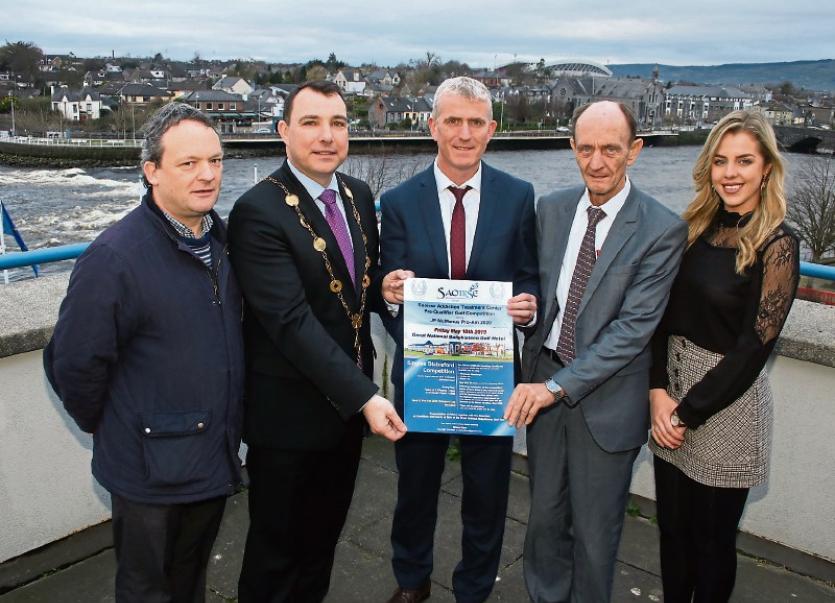 In July 2020, a galaxy of stars will descend on Adare Manor for the golf classic, which will raise thousands of euros for good causes across the city and county.

In order to obtain a spot alongside some of the game’s biggest stars like Tiger Woods, charities need to qualify from a special event in May 2020.

Across the next year, various charities will be holding their own fundraiser, offering the chance to be in that qualifier.

One of the first out of the blocks this week is the Saoirse Addiction Treatment Centre, which will hold its pre-qualifier competition in Ballykisteen Golf Hotel on Friday, May 10. Based in Davis Street, the centre helped almost 500 people who are struggling with addiction to various drugs.

The free service, which does not have a waiting list, offers abstinence programmes, addiction counselling and a harm reduction scheme.

They launched their event in Mayor James Collins’s office this week, alongside Mr Kiely, who is also the principal of Abbey CBS in Tipperary Town.

Speaking to the Limerick Leader, the Liam MacCarthy winning manager said: “It’s a very badly needed service, and I know given my own work in school, we come across family members and from time-to-time students who can have addiction issues. It’s great to know there are people out there who are willing to help and have the expertise to help out.”

Mr Kiely said some of his panel might be along to Monard to support the event – but firmly ruled out any chance of them entering the fairway.

“We have a bye that weekend [before the Championship]. But you won’t see the team. The golf takes it out of your legs. At that time of year, it’s all about getting your body rested for big days – and there will be some tough games ahead,” he said.

Of the panel who ended 45 years of hurt to land the All-Ireland title last summer, Mr Kiely said there are some fairly nifty golfers.

“Barry Murphy from Doon is a serious player, Declan Hannon, our captain is a fantastic golfer, he played a lot of golf in Adare and caddied out there. Barry Nash is a good golfer, Cian Lynch, even though he might not play a lot of golf, is handy. Gearoid Hegarty spends a lot of time around Castletroy Golf Club,” he said.  As for himself, he described his form as “pretty erratic and not worth anyone coming to have a look at!”

Alan Galvin, the co-founder of Saoirse described it as “massive” to get the support of the Limerick boss.

”The team has been so inspirational, they have put Limerick on the map, it gives us a profile we wouldn’t get otherwise. So we’re absolutely thrilled.”