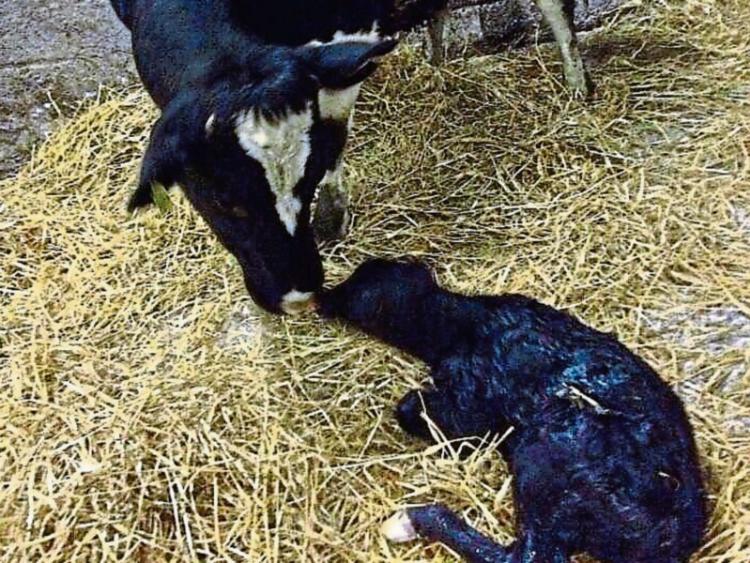 Too close for comfort: This cow could charge at the farmer in a spilt second

CALVING season is in full swing on County Limerick farms.

Farm Leader reported last year on a new trend on Twitter, Facebook and Instagram of photos of cows and newly-born calves being shared, and in some cases ‘selfies’ of the farmer with the animals.

This continues this year and short videos have also started being posted on social media.

Farmers are understandably proud of their herd’s offspring but safety comes first. It is only a matter of time before a farmer is seriously injured by a protective cow while they wave as their phone is poised.

Even the quietest animal can turn in a flash if they think their calf is in danger. Cow attacks around calving time have increased in recent years, and now surpass bull attacks as the number one livestock-related cause of deaths, says Teagasc. Taking photos or videos from behind a gate or barrier is fine but many want to get up close for a better shot.

Chairperson of Limerick ICMSA, Tom Blackburn said last year that it could be “very dangerous indeed” to get close to a calf while the mother was in the vicinity. And he repeats the warning this calving season.

“I would just remind people that they must be very careful around calves where the cows are present. I really don’t want to appear to be a killjoy but I wonder sometimes whether people appreciate the kind of threat that a protective cow represents when she feels her calf is in danger?

“I said this last year when people were posting ‘selfies’ on social media platforms of themselves posing with calves and all I’ll say is that we now seem to have progressed along to people posting short videos of themselves with new calves.

He says he understands people’s pride and enjoyment in their livestock but human safety must be paramount.

Thankfully fatal farm accidents showed a reduction in 2018 with 17 deaths. This is five fewer than the average for the previous five years. No farm fatality was recorded in the final quarter of 2018.

Fifty three per cent (9) of fatalities in 2018 were associated with farm vehicles and machinery while a further 29 per cent (5) were linked to livestock. The remaining 18 per cent of deaths (3) were from a fall from height, slurry drowning and timber cutting.

Teagasc health and safety specialist, Dr John McNamara, from Dooradoyle, called on farmers to give safety first priority during the busy spring period.  He said that the risk of farm accidents rises with increased work activity and prevention is strongly associated with implementing behavioural practices.

Being struck with a moving vehicle is the most frequent cause of farm deaths on Irish farms, so particular vigilance is needed when they are operating, he stated. A vehicle moving at fast walking pace covers about two metres per second so it gives a person in its path little chance to avoid impact.  Elderly farmers are at particular risk, he added.

Vigilance is also needed when handling livestock, particularly cows around calving. Mr McNamara advised that a freshly calved cow be securely restrained before administering a treatment to their calf.

The Teagasc health and safety specialist also advised farmers to be watching out for unstable loads around the farm.  As barns empty out, it is really important to watch out for unstable stacks of hay or straw which could collapse and cause injury.

Further information can be obtained from Teagasc offices or agricultural consultants.