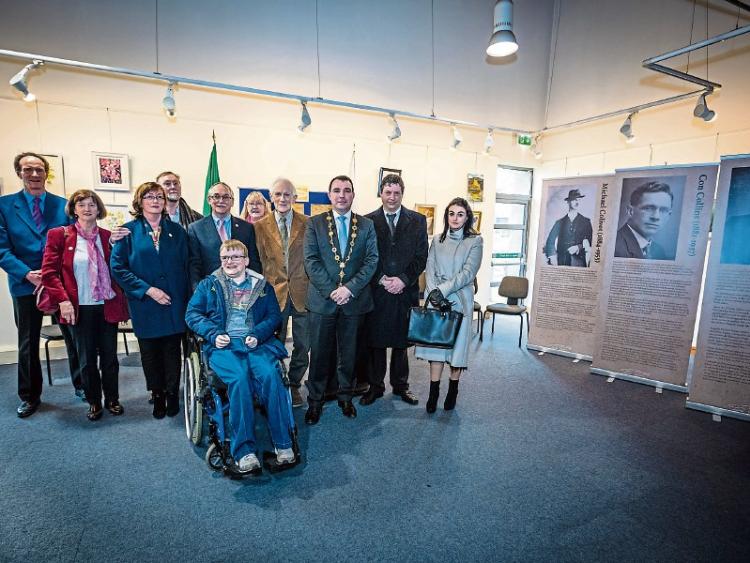 ONE HUNDRED years ago, the first three Limerick TDs were elected to the inaugural term of Dail Eireann which convened its first official meeting at the Mansion House in Dublin.

All three highly-educated men played active roles in the Easter Rising in 1916, and each served time in prison for their involvement in the insurrection, before being elected to Dail Eireann.

And all three men were remembered at a commemoration event for their family at Limerick County Library in Dooradoyle, with a wide range of memorabilia displayed at an exhibition.

Launching the event, addressing family members and local councillors, Mayor of Limerick City and County, Cllr James Collins said the first meeting of the Dail—on January 22, 1919—“is an important day in Irish history”.

But since Deputy Colivet and Deputy Hayes were incarcerated at the time, Con Collins was the first and only Limerick man to set foot in the Dail chamber on its inaugural day of sitting.

After voting against the infamous 1922 Treaty, Con Collins left politics in 1923 and worked as a superintendent for Limerick Post Office until his death in November 1937.

His son John Collins was just three at the time of his death, and was at the library event to remember his father.

Speaking to the Limerick Leader, John said that his father returned to Ireland in 1904 after being involved in the Gaelic revival in London at the turn of the century.

Con was imprisoned at Frongoch Prison, in Wales, after his involvement in the coordination of the landing of German arms shipment at Banna Strand.

John said the “most fascinating” thing about his father and his contemporaries was “that they were all so young”.

”They were all so incredibly idealistic, they had an idealistic view of life. Some people would say it was an innocent view, but if you haven’t got ideals, then what have you got? They were extraordinarily unselfish. And I believe everyone of them must have been frightened out of their lives.

He said: “After 20 years of that type of strain, it’s bound to tell a tale. That’s just a personal view, and we as a family have always felt that. We felt that it actually broke him because they weren’t heroes. Some of these fellas didn’t love war; he was terrified of war.”

“As time moved on and he got older, he felt that the world he knew was gone, and a younger generation were coming in. Generally speaking, I think he was tired and worn, I think.”

He said that Con and his wife shared a “very good life” together.

Michael Colivet, born on Windmill Street, sat in the 1919-1923 Dail and on Limerick City Council from 1920 to 1925. He retired from politics in 1925, and moved to Dublin where he led a successful career in public service.

Dr Richard Hayes, born in Bruree, was a medical doctor who a commanding officer in the Dublin Brigade, and acted as a medic during the Easter Rising in Meath.

After resigning from the Dail and politics in 1924, he became a respected historian, sat on the board of the Abbey Theatre and served as Irish Film Censor.

Mayor Collins said: “The first Dail of 1919 was the first generation to derive its solidarity from the people and the people alone.

“The meeting of the first Dail was a bold, profound and decisive statement about the future of Ireland. The members elected to the first Dail changed the course of Irish history.”

Cllr Collins said at the event on January 29 that following the establishment of democracy in Ireland, “we emerged as a stable confident nation, proudly taking our place on the world stage”.