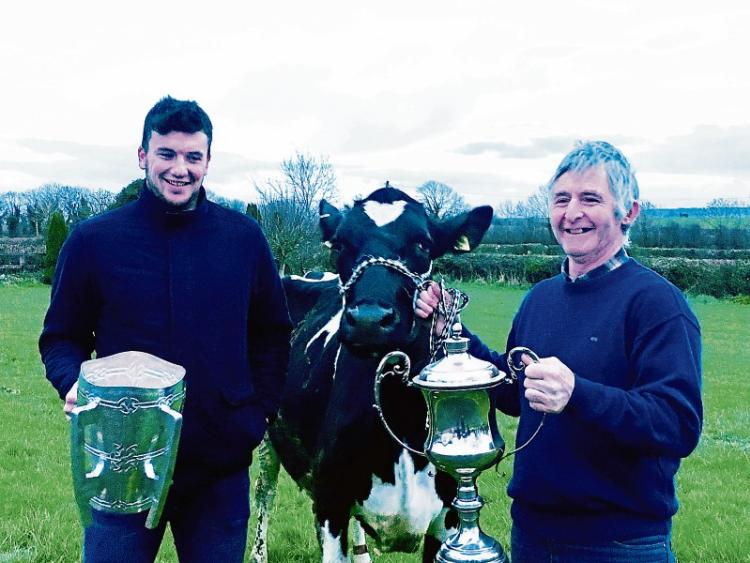 LAST year really was the year of milk and honey for Limerick.

Declan Hannon ended a 45 year wait when he lifted the Liam MacCarthy Cup high in the Hogan Stand of Croke Park. Donal Neville, who grew up alongside Declan’s father Joe in Croagh, was there to see him do it.

Two months later Donal raised his own All-Ireland trophy when his cow Milliedale Dusk Rhapsody EX95 was chosen as the supreme champion at the National Dairy Show.

Donal, who is steeped in the GAA, has been waiting his whole life to have a cow like Millie and the majority of his lifetime to see Limerick winning a second All-Ireland. With the family connection, there was the opportunity for the once in a life-time photo that took place on Sunday.

“It was a bit special alright. That doesn’t happen every day. I ran into Joe one day and he said Declan will be out some time with the cup. He was as good as his word and Declan called out on Sunday. We brought Millie out on the lawn for the photo,” said Donal.

Millie, who is as quiet as an old sheep, stood placidly beside a fellow All-Ireland champion.

“Declan was very good to bring the cup and to stand in. He had some family members to call to with the cup. I think it was the first day he got the chance to have it at home - they have been so busy going around with it. It is unbelievable the lift the hurlers have given the county people. Forty five years is a long time,” said Donal, who was also there in 1973.

The Hannons and Nevilles go back through the generations.

“Myself and Joe grew up together in Ballinaguile – there was only a stream dividing us. We hurled together with Croagh and he was always very proud of being a Croagh man.  Joe’s father Davey Hannon and my father Tommy Dan Neville would have been strong GAA men,” said Donal, who is married to Kathleen, and they have three children – Ann, Thomas, Caitriona. Mick Neville Park in Rathkeale is named after his granduncle.

The Hannons moved a few miles to Adare in the seventies but the families remained close. Donal has known Declan since he was a boy and trained him at U-16 level. Little did he know, some 10 years later they would be posing with the pedigree breeder’s champion cow and the Liam MacCarthy Cup.

“That photo with Declan, Millie and two cups is going up on the wall,” said Donal, who thanked Declan and Joe for making Liam MacCarthy available to them.