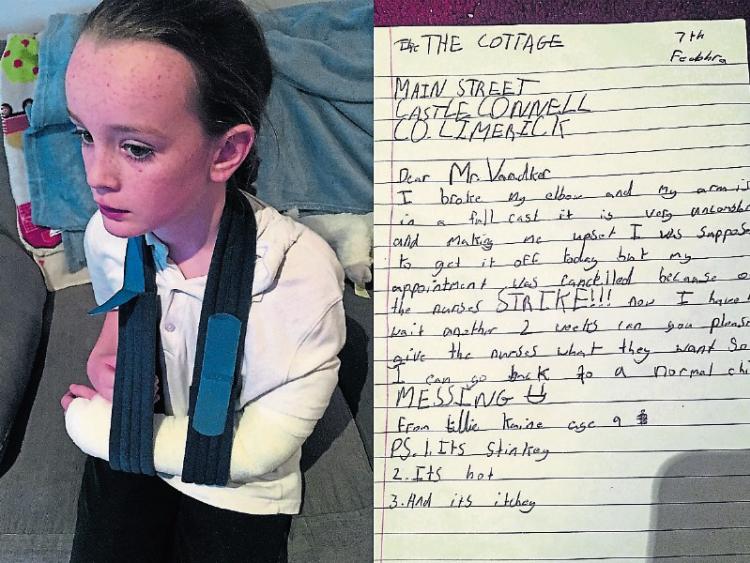 Tillie Kaine, aged 9, from Castleconnell and the letter she wrote to Leo Varadkar

AN UPSET County Limerick girl in a cast has penned a letter – with her one good hand – to Leo Varadkar over the nurses’ strike.

Tillie Kaine, aged 9, from Castleconnell, informed the taoiseach that she broke her elbow and her arm is in a full cast.

“It is very uncomfortable and making me upset. I was supposed to get it off today [Thursday] but my appointment was cancelled because of the nurses’ strike. Now I have to wait another two weeks. Can you please give the nurses what they want so I can go back to being a normal child messing,” wrote Tillie.

She stressed the predicament she is in by concluding the letter with: “It’s stinky, it’s hot and it’s itchy.”

To date, the Sinn Fein TD is the only one to reply.

Letitia said she knows there are people much worse off than her daughter but that it is “from her heart”.

“When I told her the appointment was cancelled she asked ‘why’? I told her the nurses were on strike. She asked whose fault was it? I said it is the taoiseach’s fault and she said, ‘I am going to write him a letter’,” said Letitia.

Tillie’s cast was due to be removed on Thursday of this week but her mum got a phone call on Wednesday to say it was postponed until next Thursday, February 14.

“Then I got a letter today to say there is a strike next Thursday as well so it will be the following week,” said Letitia.

Tillie broke her elbow at the beginning of the year in a roller skating accident.

“She was standing at a wall. Her foot went from under her. She put her hand straight down onto the path to break her fall and it snapped,” said Letitia. Thankfully it is her bad hand but she is missing out on PE in Castleconnell NS and playing basketball for longer than is required.

Deputy Quinlivan thanked Letitia for her email and Tillie for the “lovely little note”.

“Our nurses are currently taking to picket lines all across our state to fight for better working conditions and restoration of pay. I am hopeful that this can and will be sorted soon.

“I have sent a little note in the post to Tillie today and while I know it won’t solve the issue I hope it helps bring a little smile to her face,” wrote Deputy Quinlivan.