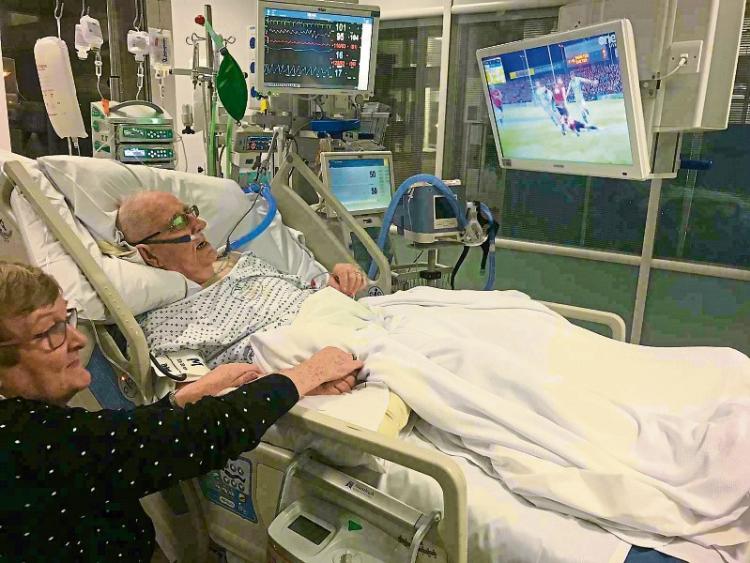 DESPITE being in intensive care in his final days of life, Limerick businessman Martin Sheahan was able to grasp one of his last moments of utter joy as he held the hand of his loving wife while watching his favourite rugby team win.

Described as “The Original Mr Binman”, having founded the company of the same name, the 79-year-old Grange grandfather one of Limerick’s best-known entrepreneurs, died on January 23 following a brief illness.

All his life, Martin was a fighter, said his son Mark on the day of the removal.

“Over the years, he had more illnesses that would have knocked every one of us,” he said.

In his early 20s, Martin lost sight completely in one eye. More than 20 years ago, he had an operation on his other eye.

On two occasions, Martin had been told by doctors that he had just months to live - the last time being in 2009.

“The doctor told him he had six months left and that there as no curing him.”

Fast forward 10 years, Martin continued to have the “drive-on” attitude, even while struggling to see, rely on a walking stick and not being able to drive.

“He was an absolute fighter, and anyone who knows him would know that absolutely nothing would get him down.

“No matter how bad things were, be it health-wise, be it work-wise, he never showed it,” explained Mark.

And even when he was faced with his last bout of illness and “just went very quickly”, his optimism never faded, his only daughter Marie said.

“We were like, dad’s big phrase was ‘drive on’.

And on the previous Saturday, while Munster faced Exeter in the crucial European Champions Cup challenge, he was eager to know the score of the game.

A nurse promptly decided to bring in the television and switch it on for him.

“While he couldn’t see it, he could hear it. We actually got a picture of dad watching the last 10 minutes. Despite being in intensive care, he was so delighted with the win and it perked him up even at that stage. The love of sport really gave him a boost,” she said.

In this picture, it shows an attentive Martin waiting for the final whistle to blow, while he holds the hand of his loving wife, Mary.

Every weekend, Mark said, Mary read the paper for her husband, her rock.

“I think we need to acknowledge the love and the relationship that dad and mam had, because they were each other’s rock and they will still be each other’s rock. They were such an amazing, united couple,” Marie said.

Mark said his father, who grew up and went to school in Donaghmore, “never cared about money” and he all he cared about was providing for the family.

“The biggest thing he gave all of us is the upbringing that we have now. He made sure, no matter what happened, everyone had a successful life. We all had a great education, we all had his will to work. That is what he instilled in all of us. And as a family, we have no fears because of him.”

Martin, who was a pioneer in the Irish recycling and waste industry, employed 330 people and had an additional 270 working indirectly for him.

Martin’s sister-in-law Angela said he had “great charisma” and always held functions for his staff on special occasions.

“He had his hands in his pockets to help everybody out. He was very generous to everyone.”

His grá for work stemmed from farming at a young age, followed by the purchase of his first JCB in his 20s, after completing his studies at the Agricultural College in Pallaskenry.

The family commended UHL staff for their “empathy and compassion”.

He was buried at Donaghmore Cemetery last Saturday afternoon.