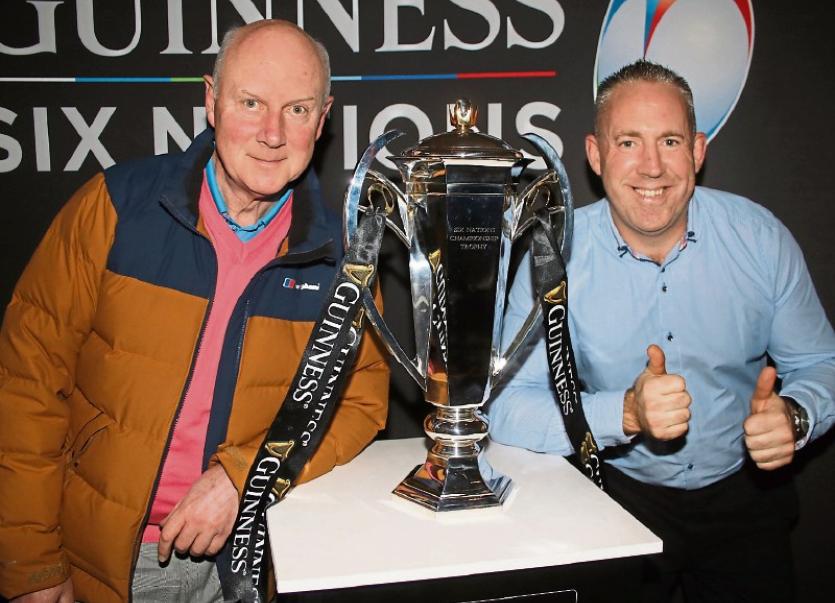 WE are getting hungry for trophies in Limerick and while it may not have visited as many locations as the MacCarthy Cup, the Six Nations trophy caused quite a stir when it arrived in the city last week.

Ahead of the 2019 Six Nations campaign, the tournament’s championship trophy visited three pubs in Limerick, as part of a campaign by its new sponsor, Guinness.

The cup touched down at South’s Pub, before moving onto the White House and Jerry Flannery’s pub in Catherine Street, which is owned by the family of the former triple crown winner.​

Asked how excited he was to have his picture taken with the trophy, competition for which gets under-way with France v Wales this Friday, Bernard Whelan, O’Connell Street, said: “Very much so”.​

So much so in fact, it was the second time he had his picture taken with the silverware in a day.

“It's been a lovely day,” he grinned.

Ireland won a multitude of trophies during last year’s Six Nations, including the championship, the Triple Crown, the Millennium Trophy and the Centenary Quaich.

"The organisation of the team was unbelievable. They really play to their set skills. They are a wonderful team as opposed to individuals,” Bernard said.

Terry Clancy, Castletroy added: “They have to be favourites. A lot will depend on the England match. Everyone wants to beat the English of course! If Ireland get over that, they have a great chance of winning. England will be the team to beat. If we beat them, we will be happy enough.”

Jack Flood had the responsibility of carrying the trophy around Limerick’s pubs.

He said: “There has been a great reaction so far. Our pubs have been quite busy. I’m happy enough with the turnout so far.”

Ireland get their Six Nations Championship campaign under way this Saturday against tournament second favourites England in the Aviva Stadium this Saturday.

It is the 125th time the tournament has taken place. Up to the year 2000 it was the Five Nations. Italy joined up after that to round the number at six. For more, see Pages 34 and 35.