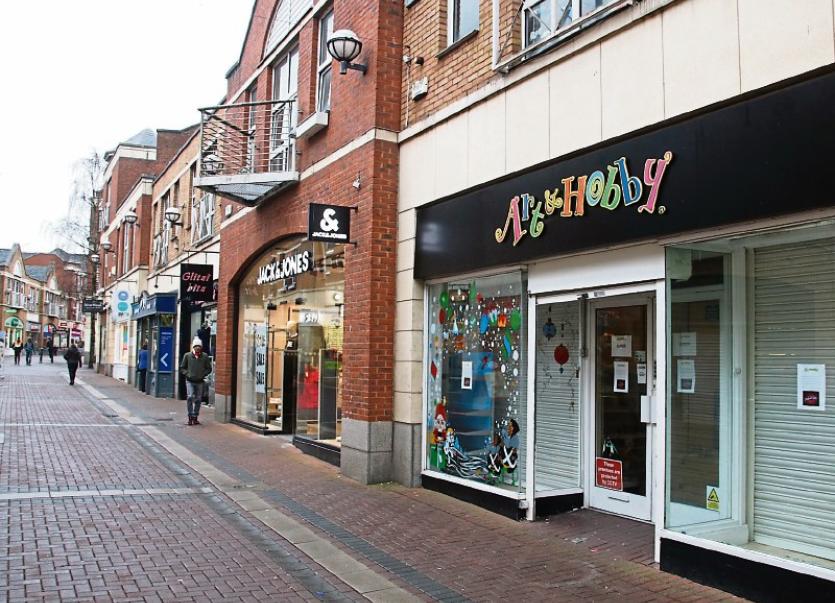 Cruises Street has seen a number of closures in recent months, including most recently Korky’s Shoe Shop and Art and Hobby

OF all the shopping thoroughfares in Limerick, it could be argued that Cruises Street is facing the biggest of challenges.

The pedestrianised plaza, built in 1992, has seen a number of closures in recent months, including most recently Korky’s Shoe Shop and Art and Hobby with vacant units now a striking feature.

Many now argue the street is in serious need of reimagination.

John Moran of Liveable Limerick, the former secretary general at the Department of Finance, said these days, single-purpose streets do not work.

”It’s designed as a retail only stretch. That’s not to say there are not some apartments overhead, but they are not a dominant part. If you have an office quarter, it’s empty at night. If you have a single purpose offering like Cruises Street, at 6pm at night, why would you want to be there? It’s not like there are restaurants, or a social community there,” he said.

At present, Mr Moran says Cruises Street does not offer a compelling reason to go there, but he argues it could form a major link to the Milk Market if developed properly.

“Cruises Street could be as nice as Little Catherine Street – but we just don’t see it like that. Imagine if that street was known in Limerick for having the best free wi-fi in Limerick? People would be sitting down there with their phones. And that’s another point: I don’t think there is a seat from one end of Cruises Street to the other,” he said.

Mr Moran suggested Cruises Street could have gaming consoles, or a mini-cinema to keep people there after hours.

Donal Mulcahy, of Nancy Blake’s pub, owns a unit on Cruises Street. He believes many firms availed of a tax break scheme when the street was first built, and moved on when that expired.

“The Corporation maybe need to look at it themselves, maybe they could get some incentive to reduce rates in the area, or maybe if they arrange to roof that area, it might entice people to come in. I’ve seen this happen successfully in Barcelona and Madrid,” Mr Mulcahy said.

Covering the street in a similar fashion to parts of the Liverpool One Shopping Centre in Britain is an option favoured by a number of parties.

But one problem, which has been acknowledged, is that several different people own property on the street.

Chamber chief executive Dee Ryan said: “Cruises Street has a unique opportunity to be a better link between O’Connell Street and the Milk Market.”

Ms Ryan believes the developments around Project Opera could give Cruises Street a new lease of life.

Indeed, John Moran warns that it is “too soon” to sound the death knell for the street.

“I’ve seen dead streets and that’s not one of them. There are lots of streets in our city which just don’t work. But if you go to Cruises Street on a Saturday, it’s busy. There are little stands and people hanging out and doing stuff,” he said.

A number of shops have closed in Cruises Street in #Limerick city centre in the past few months. I'm looking for ideas and thoughts on the future of the street for a feature in the @Limerick_Leader . Give me a shout! (from @adrian_butler) #business pic.twitter.com/cxiSsesDue

Like many American style pedestrian 'malls' Cruises St. is failing due to lack of diversity of use. While one could 'redesign' and 'redevelop', a cheaper solution would be first to analyse the current uses (mainly high street retail) and examine how it could become more diverse..

Wouldn't something like this brighten up our lives! pic.twitter.com/L4weR9blGB

A lot of the units on the street are too small for high end retail stores that would actually attract people to the street, a redevelopment is needed, look at Opera Lane in Cork, similar kind of street but with modern high end retail units that you see in the Crescent! pic.twitter.com/kPBWCxaR8l

Diversify! I dont agree a large ground floor tenant is needed. In fact, its the opposite. How about a street of popup shops. Low rent. Staggered monthlong contracts. Like an everyday Milk Market. Help small businesses flourish whilst keeping the customers engaged.

Give the empty spaces to artists. Fill up the spaces with interesting things or for small business to be given a better chance of starting a new business.

I’ve been criticised in recent weeks but I stand by my opinion that the current units should be knocked to allow a complete redevelopment. It doesn’t work anymore (some would say it never worked!) so we need to stop flogging a dead horse.

Even in Ireland there’s a saturation point for cafes! Mixed use (not eg single retailing) is answer and of course taken with surrounds.

Redevelop the street completely. Build a state of the art office complex which will help attract more big companies to locate in the heart of the city. Ground floor restaurants/ theatre/ M&S / cinema etc

For me a giant food quarter should be put in there. Either shops or restaurants but all to do with food. I guess the only problem with that are the shops already there

We recently collaborated with @MickbradleyZESO and ZESO Architects on some alternative visions for Cruises Street, see below Nick: https://t.co/3rwrond1ZM